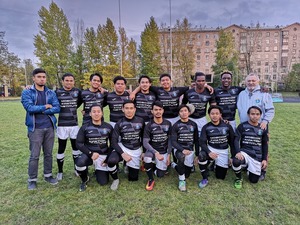 On October 6-7, 2018 was held the first tour of Rugby-7 games in the framework of XXXI Moscow Student Sport Games. MAI rugby team of International students took second place in the 2nd division, and first place in the 1st division.

MAI Rugby Team of international students formed of Malaysian students, students of Botswana and Benin. The tutor and coach of the team is Valery Khromenkov, who trained MAI Rugby Team for many years. Under the leadership of Khromenkov the team of the first division traditionally does not concede to other Moscow student teams.

“Before the game I have told the students – on the field you will represent not only MAI, but also your country”, - said the couch. The second place and movement in the first division is a good result. Now MAI Rugby Team of international students will play at the first division with the winners.

The second tour of XXXI Moscow Student Sport Games in Rugby-7 will be held on October 13-14, 2018, and the third tour – in April, 2019. Time will tell the winner, but we wholeheartedly believe in MAI rugby teams.

“I think that we will be working on the physical training, moral and volitional powers of the players. In 2019 will be held the Festival of Malaysian students, which took place almost every year. Traditionally there will be the competitions on rugby. The task of our payers is to win. The students feel pretty good about that”, - told coach Valery Khromenkov about future planes of MAI Rugby Team of International students.