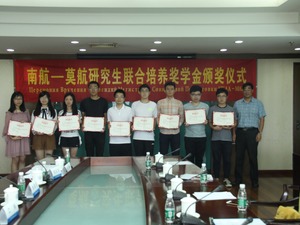 On July 3 at Moscow Aviation Institute was held a solemn awarding of grants for study at a joint Master’s degree program of MAI and Nanjing University of Aeronautics and Astronautics (NUAA). It should be reminded that in September 2018 nine students from the University will come to MAI to continue their studies at the Master program in the direction of “Aircraft Engineering” and “Propulsion Engineering”.

Now MAI is actively developing programs of cooperation with Ministry of Education of the People's Republic of China. The Chinese department pointed MAI among other universities, because from the middle of the last century MAI is a partner of several major Chinese universities. That is why now it is much easier for university students in China to get a government grant to study at MAI, rather than at other universities in Russia.

The grant program includes full compensation for tuition and accommodation at MAI dormitory. The grant also provides the full material support of students throughout the year of life in Moscow.
Chinese students, who have received the grants, are already demonstrating their knowledge in Russian. The students have chosen Russian names and are preparing intensively for their arrival in Moscow: they watch Russian films with Chinese subtitles and are interested in Russian culture and history.