MAI Presented the Developments at the International Exhibition "HeliRussia"


Moscow Aviation Institute (National Research University) presented its developments at the International Helicopter Industry Exhibition “HeliRussia – 2018”. The exhibition was held in the Crocus Expo Exhibition and Convention Center fr om May 24 to May 26, 2018. HeliRussia is the largest event in the Russian helicopter engineering. In 2018, the exhibition was held for the 11th time. 256 companies fr om 19 countries took part in it.

It was possible to get acquainted with the developments of MAI at the exhibition at once on several areas. The main point for communication and demonstration was the stand of Moscow Aviation Institute. There were presented the results of their work for the helicopter industry by the faculties "Aircraft Engineering" and "General Engineering Training", as well as the institutes "Aviation and Rocket Engines and Power Installations " and "Control Systems, Informatics and Power Engineering". The most popular among visitors of the exhibition were unmanned aerial vehicles, some of which were launched right there in the show-room by the specialists of MAI. In addition to the classical and familiar drones for various purposes, visitors could see at the exhibition a new hybrid model that combines the design capabilities of an airplane and a drone. The amazing device, using the same batteries as the drone and a new approach to the design scheme, can stay in the air for several hours. 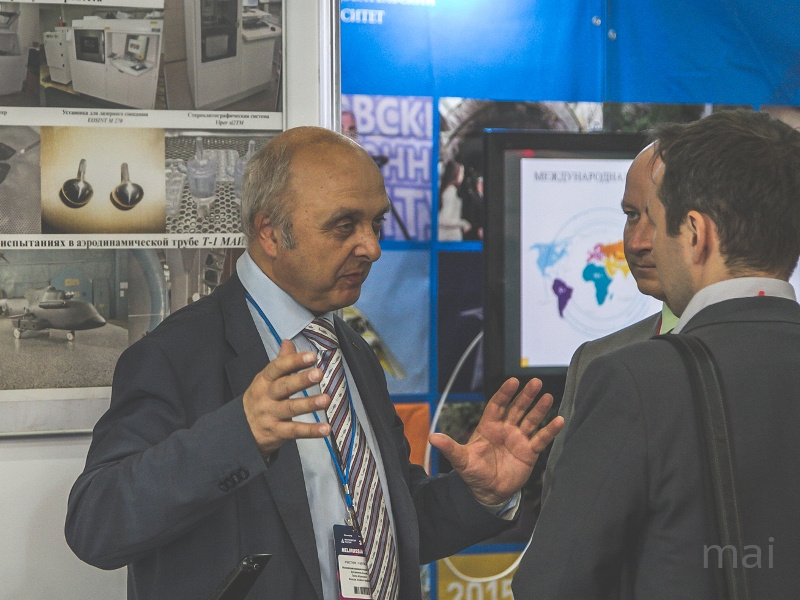 On the stand were also displayed walking robots of an insectomorphous type, samples-demonstrators of the additive manufacturing of MAI, a drone with an anisogrid structural layout. Specialists of the department "Helicopters’ Design" brought fr om the testing a helicopter blowoff model with a set of new loaded hardpoints and thus serve as a model to talk about the research and analytical work carried out by the department.

On the platform of the International Festival of Children's and Youth Scientific and Technical Creativity "Clear Prop!", aimed at the very young visitors of HeliRussia-2018, MAI presented its well-known training aerobatic complex – the simulator of manned aircraft control. On this device, the children, choosing a civilian or combat aircraft or even a helicopter, could practice in testing various modes of flight run in any given conditions. At the stand of the holding "Technodinamics" were presented collaborative developments of the holding company and Moscow Aviation Institute in the field of the accident-prevention fuel systems of the aircraft.

The researchers of MAI were also noted within the framework of the business program: on May 25, the MAI engineer Andrey Kolpakov gave a lecture "Protected Uncrewed Aerial Vehicle with an Anisogrid Structural Layout", and on Saturday, May 26, the head of the department "Helicopters’ Design" Yury Ignatkin made a presentation on "Engineering Personnel Training for the Helicopter Industry". Also on the final day of the exhibition was held the HeliRussia Cup on drone-racing, where our students and researchers demonstrated their skills at a track, specially created for the exhibition.

The exhibition for MAI members was positive and productive.