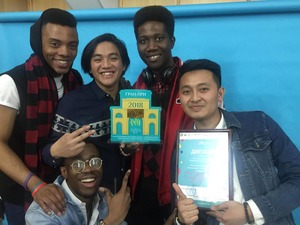 International students of Moscow Aviation Institute took part in the regional stage of the “Russian Students Spring” festival. Two contestants from our university were in the musical part of the festival: Dmitry Veshnyakov in the beatbox nomination, and The Royal5’s music band.

As a result of the regional stage of the festival, Dmitry Veshnyakov came second best, and the guys from The Royal5’s band were awarded the grand prize and made it to the finals of the XXVI All-Russian Festival, “Russian Students Spring”, that will take place in the city of Stavropol from the 15th to the 20th of May, 2018.

At the competition, The Royal5’s performed the song called “Without You”. You can read more about the band in the MAI Oblako magazine.

“Russian Students Spring” is the flagship event of the Russian Union of Youth and the only program in Russian to support and develop independent student art. The program is implemented at the territory of the Russian Federation and includes two international, ten all-Russian, nine district, and 80 regional events.