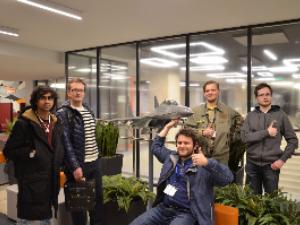 This promising project, which can optimize the maintenance service of Sukhoi Superjet 100 aircrafts, was created by the team called “Chinese Pilot” at the Aviahackathon in MAI. The event was held in April and organized by the IT Center of Moscow Aviation Institute.

At first glance, the team members seemed to be very diverse in their fields education and activity. Moreover, they met right at the hackathon. In spite of all that, they managed to find a common language and combine their experience, skills and knowledge. As a result, they won in the nomination of Sukhoi Civil Aircraft Company. The project was also awarded with a special prize fr om the Indatalab company.

After the hackathon we spoke with the team members.

‘There were five of us in the team (Yury – second from the left of the photo). We have never met before and didn’t know each other at all. The team was put together right at the hackathon. Half an hour later we were debating with enthusiasm about which tasks to pick and how to solve them. Also by accident our team turned out to be very diverse: we had members from Moscow Aviation Institute and Bauman Moscow State Technical University, an analyst from a civil aviation company, and a member from business and IT startups sphere. I want to note that we also had a first-year international student from India, Karbelkar Mohammad Rajil Mahboob, on our team. He was a coder. As a result, we got an explosive mix of competences, which was the key to getting first place in two nominations.

The most interesting part which provided a great deal of room for creativity was the nomination from Sukhoi Civil Aircraft Company. According to the initial task, we had to create a calculator and a prognosator of the maintenance service cost for Sukhoi Superjet 100 aircrafts. We could only base it on the open flight data of this type of airplanes in the Aeroflot company for the past 6 years. We decided to go even further and designed a prototype of maintenance service optimizer based on computer-aided learning.

We faced some issues with the data from Aeroflot, including some curious ones. For example, in their database there was an aircraft with an absolutely incredible tail number and over 100 hours flown. Or there were some flights wh ere landings were made before take-off. There have also been some abnormalities which were not mistakes, such as returns of aircrafts. We were especially surprised by a flight which took off in January 2014 from the Sheremetyevo airport in Moscow and landed in the same place after 6 hours of flight. All those errors in the database needed to be found and corrected. We spent over half f our time on that alone. Within 48 hours, we managed to implement a series of unique solutions in our program, but we didn’t have enough time to finish everything we had planned.

At the end of the event, we came up with numerous ideas for implementation of computer-aided learning on big data in aviation. Now we are thinking of creating a commercial product which will be highly demanded. Why not? Many successful startups have originated at hackathons. In my opinion, our project is rather viable, because every minute of aircraft idle time due to maintenance costs a lot, and saving 0.5% of expenses means millions of dollars of annual income. Our program can save companies money.

We do not have any arrangements with Sukhoi Civil Aircraft Company, but they invited us to make a presentation at a conference for their colleagues and the MAI Rector, Mikhail Pogosyan. We need to finish the product and turn it from a prototype into a more practical solution. This is a very interesting and creative task which we will be working on in our free time.

By the way, I am a regular participant of various hackathons. I think this format helps develop one’s thinking, to shake you up and take a fresh look at many things, and to get an incredible drive from implementing your own ideas in just a matter of hours. Recently, I've been and more interested in computer-aided learning, that is why I was so enthusiastic about this project. I’ve been working in the IT business for several years now, and created my first startup back when I was on my second year of studies, so I had to combine it with my work and studies. I was working in various areas: programming, analytics, finance and marketing’.

‘We liked the nomination from Sukhoi Civil Aircraft Company because we could and had to implement all our creative energy (Aleksey – second from the right of the photo). At the same time, it had practical application. Thus, that was the real critical task faced by civil aviation, — to optimize maintenance service of aircrafts.

It took us a while to figure out the concept of the project and to present it as a unique development. We got assistance in that from the Sukhoi Civil Aircraft company consultants. Our team was very diverse, but the combination of competences was perfect. There were brilliant programmers, analysts, experts in aviation and IT market. For instance, my colleague from Bauman University, Anton Nedogarok, had extensive experience in MS-12 program. Yury, our team captain, is a professional programmer, marketing expert, and creator of several startups’.

I would like to express my special thanks to the organizers – the MAI IT Center. They did their best to ensure efficient work of the teams.

Igor Grigoriev, team member, student of the School of Information Technology and Applied Mathematics of MAI

‘Our team has managed to apply contemporary methods of analysis and data visualization for the purpose of forecasting the cost of ongoing maintenance service of SSJ-100 aircraft. I was especially attracted by the aviation nature of the task given.

The main challenges consisted in data processing. It was from different sources, and a lot of effort was spent on converting data to a single format and searching for erroneous data.