MAI at the World Festival of Youth and Students 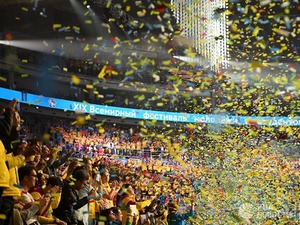 Moscow Aviation Institute is one of the most active participants of the 19th World Festival of Youth and Students.

On Saturday, October 14, the MA students took part in the grand carnival parade of students. Despite the Moscow weather, 1600 MAI students - one of the largest groups, marched festively among the 35,000 Russian and international students. The parade united the traditions of world’s most famous carnivals – from Brazilian to Venician.

On October 15, in Sochi, the main venue of the Festival, the MAI Rector, Mikhail Pogosyan, met with the MAI students who participate in the track in “Modeling the future of high-tech systems” within the scientific and educational thematic area.

During the meeting with the Rector, the students got a chance to discuss the new prospects and opportunities that today’s Moscow Aviation Institute students have. Mr. Pogosyan encouraged the MAI students to take the most active part in their university’s life, to introduce new approaches and to work together in search for promising areas of the university development.

The Rector drew the participants’ attention to the job prospects at the university, as well as at the importance of R&D work for the students and the trend for youth development that provides the most modern opportunities for all active and interested students of MAI.

At the end of that day, the MAI delegation headed by the Rector went to the grand opening of the 19th World Festival of Youth and Students. The President of the Russian Federation, Mr. Vladimir Putin, encouraged all participants from the stage of the Bolshoy Ice Dome: “Go for it! Create your future! Strive to change this world, make it better! All is in your power! The main thing is to go only forward”.

Today, on October 16, starts the MAI track in “Modeling the future of high-tech systems”. You can read more about the Moscow Aviation Institute program at the 19th World Festival of Youth and Students here.