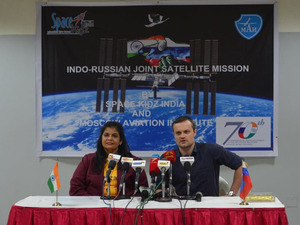 A new spin has been put on a partner project of Moscow Aviation Institute (National Research University) together with the Indian agency, Space Kidz India that implements an international platform for strengthening links among young scientists of different countries. As part of the project MAI and SKI shall develop and launch into orbit a space vehicle prepared by students from MAI and from India. The initiator from the Indian side is Dr Srimathy Kesan, founder of Space Kidz India and a partner and a close friend of MAI

Representatives from MAI and Space Kidz India held a joint meeting at the International Aviation and Space Salon MAKS-2017. The meeting resulted in a program for a long-term cooperation with regard to the joint launch. Just in three months, this October, a satellite will be launched into the International Space Station. This event will mark the friendship and strong partnership between India and Russia. Moreover, 2017 marks the 70th anniversary of Russian-Indian diplomatic relationship.

‘This partnership is the first joint educational project of this type between MAI and India. Our motto is “have a dream and make it a reality”, because the main participants are the new generation of talented youth which will have an opportunity to witness and study the process of space-system engineering and take part in it themselves. The joint work on this project will aid develop the principles of mutual understanding, trust and cooperation in training the specialists in the area of space technology and help enhance the role of MAI in international educational, social and economic areas,’ says Dr Olga Tushavina, Dean of MAI Aerospace Department.

January 2018 will see the start of work on the project for the development of CubeSat-type satellites on a platform developed in Moscow Aviation Institute. The Indian Agency with support from the University will develop three small space vehicles to be tested and launched into orbit. Moreover, as part of the partner project within the next two years a student satellite, developed by MAI students and talented youth from India, will be launched into orbit.

‘MAI has a vast experience in carrying out space experiment on the Russian ISS segment, including the international ones, like Inter-MAI-75, Sfera and EarthKam. It seems very promising to involve new participants into such projects and our Indian partners have solid innovative groundwork in the area of electronic elements which are interesting to test in the context of a real spaceflight,’ says Mr Firsyuk, Head of Student space design bureau.

Space Kidz India is a major Indian organization involved in promoting arts and science for senior high school students and University students, as well as in the development of an international platform to strengthen the links among young scientists of different countries in the area of aircraft and spacecraft engineering, robotics and medicine.