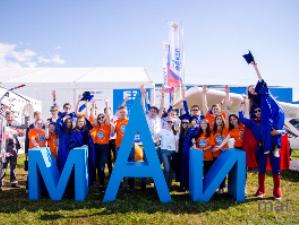 Moscow Aviation Institute will present its developments on several platforms of the International Aviation and Space Salon.

At the main stand, the visitors can get familiar with a multifunctional on-board radar station of millimeter range. Placed on a drone, the station can map the surface in different modes and combine this map with the location map.

This year at the MAKS salon, a hydrogen engine for MAI-223 “Kityonok” light aircraft, developed by the RAS Institute of Chemical Physics Problems, will be demonstrated. Tests of an auxiliary power plant operating on hydrogen-air fuel cells on “Kityonok” will take place in fall-winter of this year. Another MAI’s no less interesting exhibit is unmanned gyroplane with bailout system. What is peculiar about it is that it is immediately launched into the sky from the launcher, without wasting time and fuel for acceleration.

MAI’s exhibits at MAKS-2017 will not only fly, but also move on the ground. One unique project is a “Pelets” cross-country robot, a winner of the RoboCross-2016 competition. The unmanned robotic platform, which looks like a mini tank, was created by the students and teachers of the Faculty of Robotics and Intelligent Systems. The salon’s visitors will be able to not only watch the drones, but also control some of the flying ones, via the “Calibri” training complex. Thanks to MAI, the visitors will get a chance to try on the role of an airplane pilot: MAI’s flight simulators will be located on two of the salon’s platforms.

MAI will plunge into the aquatic environment as well, with the help of the center of mass indicator. Underwater drones’ knowledge of the center of mass allows them to avoid instability while in water. The fact that both this development and “Pelets”, as well as some of the other were created with direct participation of students fully justifies the MAI’s presence in the MAKS’s University Science and Aviation and Technical Creativity of the Youth section. Of particular interest is the MAI exhibit within the “Ot Vinta!” Festival of scientific and technical creativity stand. The projects made by schoolchildren who study at the Center for Support of Technical Education at the University will be demonstrated. A flying weather station, the “SKAT” prospective aircraft, an air taxi – those are just some of the prospective developments for the future of the Russian aviation that will be demonstrated by the young scientists.