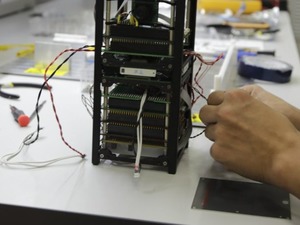 A Moscow Aviation Institute student from Korea, Sung Wook Yoon, took part in the XIII International Summer Space School, dedicated to the 60th anniversary of the launch of the first satellite, "Sputnik 1", and to the 75th anniversary of the Samara University former Samara State Aerospace University. The School’s motto is: "From mission idea to nanosatellite project". Here is what Sung Wook Yoon told us about his impressions of attending the summer space school:

“That was my first time in Samara, even though I study in Moscow, in MAI. In my opinion, Samara is better than Moscow not only because the weather is nicer, but because I also enjoyed studying in the summer school, with its special atmosphere and team work. The summer school gave me an opportunity to communicate with people from all over the world. When I just got there, I had no idea how the space industry is developed in other countries, such as Mexico, Brazil, Japan, I didn’t know what they’re working on. Now I have an understanding. In MAI, I major in Spacecraft Engineering, so I know everything about rockets, however I lacked knowledge in such a useful thing in a rocket as nanosatellites. That is why participation in the Space School was so important to me. Studying there was a challenge as that is not my direct specialization, but I accomplished the task that I had set for myself. I will definitely recommend this summer school to my colleagues, as it is a great chance to improve your knowledge and to meet like-minded people from different countries.