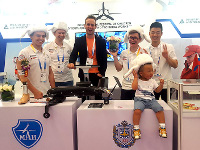 The “Ot Vinta!” International Festival of Youth Scientific and Technical Crafts was held in the Chinese city of Harbin. Young Russian engineers introduced their inventions in the fourth Russian-Chinese expo.

Several joint Russian-Chinese meetings were held as part of the Festival, where education and production in China, interaction of experts from both countries, cooperation with the universities and Chinese counterpart of the Russian "Skolkovo", exchange of excellence and many other matters were discussed. The Festival organizers noted the work of a student at the Moscow Aviation Institute, Mingonga Shi, which helped to strengthen the cooperation between MAI and Chinese universities.

See the "Commonwealth of Aviation Experts" portal for details on the status of the event.