International rocket modeling competition held at the MAI air base 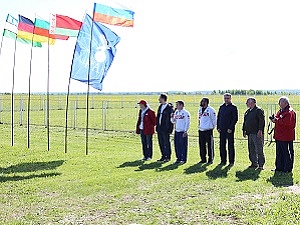 On May 26-30, the Cup of S.P. Korolev World Cup stage in modeling of S rockets took place at the MAI’s own air base in Alferyevo.
14 teams fr om Russia, Bulgaria, Belarus, Germany, and Uzbekistan took part in the competition. It is worth mentioning that the aeromodeling sport unites all generations – among the 60 participants were both young rocket modeling fans who were only 7 years old, and experienced 75-year-old athletes. On the opening day, Vice-Rector for Academic work, Dmitry Kozorez, Dean of Robotic and Intelligent Systems faculty, Konstantin Tikhonov, and the air base director, Evgeniy Kozhevnikov, came tri greet and congratulate all the participants.
Dmitry Kozorez thanked the organizers of the competition for choosing the MAI air base for the second year in a row to be the platform for holding rocket modeling competitions, and expressed his hope for it becoming an annual tradition. He wished all the participants to have a successful start, good flying weather, and, of course, victory.

On the very first day, the teams from the First Cadet Corps and School No 709 of the city of Moscow, coached by the MAI teachers and students - Anatoliy Kachalin, Director of the Resource Center for Scientific Research and Innovation Technology (RC SRIT), Olesya Zadorozhnaya, Deputy Director of the RC SRIT, Mikhail Chernyak, the RC SRIT technician, Yegor Larin, Kirill Strokov, and Andrey Stepanov, competed in the model rockets for the duration of the descent on the tape S6A discipline.

The second day of the international competition was the most exciting and spectacular. Participants from Moscow and its regions prepared for the spectators some of the legendary rocket copies like the N1 Moon rocket, the Zarya Proton, the Phobos Proton, the Breeze Proton, Group for the Study of Jet Propulsion, R-36, М-100-V, MMR-06, and MR-20.

The skills of the model craftsmanship and flight realism were assessed to determine the winner in this discipline. For the guests of the event who wanted to try on the role of a rocket modelist or a quadrocopter pilot, paper rocket modeling workshops were organized, and drone flight simulators were available.

That exciting day ended with the competition in the model rockets for the duration of the descent by parachute S3A discipline, wh ere the teams from the First Cadet Corps and School No 709 of the city of Moscow participated as well.

Congratulations to our cadets, pupils, and their coaches for their successful work! Victory and prizes in such serious international competitions deserve admiration. Such results are a great incentive for other guys who still doubt whether or not to try themselves in rocket modeling.

Moscow Aviation Institute is proud to have a great role model in this sport – our own PhD student, Assistant Professor from the 204 Department, and multiple winner of the World and European Rocket modeling cups, Aleksey Yezhov, once again became a two-time winner of this competition in the model radio-controlled rocket-planes for flight duration and landing accuracy S8E/P discipline, and we congratulate him on that! Keep it up!