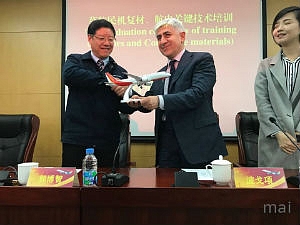 Moscow Aviation Institute initiated yet another successful cooperation project with China – this time with a major aerospace corporation of China, COMAC. Its engineers have just finished their studies on two MAI academic programs – Composite Materials and Avionics Integrated. On April 7, the MAI Rector, Mikhail Pogosyan, awarded the graduates with the certificates on their successful completion of the program.

This successful execution of the first contract opens up new perspectives for cooperation between MAI and COMAC. According to program curator, Daria Vorobyova, the MAI Rector and President of COMAC have agreed to continue carrying out MAI’s educational programs for COMAC in such areas as Certification and More-Electric Aircraft.

It should be noted that COMAC was not the only destination of MAI’s delegation official visit to China. On April 8, they also visited Shanghai Jiao Tong University (SJTU), one of the top 100 universities in the QS ranking.

‘We signed an agreement of academic cooperation within the Joint Institute with Shanghai Jiao Tong University’, - noted Daria Vorobyova. ‘On April 8, at a ceremony dedicated to SJTU’s 121st birthday, the MAI Rector delivered a speech for the students and teaching staff of the university’.

The SJTU and MAI Joint Institute involves the preparation of masters in three promising areas - PLM, the design of structures made of composite materials, and engine design. At the same time, we are not talking about the training of narrow specialists in the aerospace sphere: MAI and SJTU will train engineers with an extensive set of competencies.

‘Both Russian and Chinese students will study within a unified curriculum in one group’, - explained Daria Vorobyova in one of the interviews with MAI media. ‘They will study in SJTU on their first year, then on the second year they will study in MAI, and after that for six months in SJTU’.

Within several days, meetings with leaders of a number of Chinese universities are planned in cities such as Nanjing, Beijing, Shenyang and Harbin, in order to discuss cooperation formats.