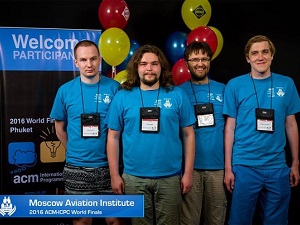 Subject competitions are often associated with something from the school, with honors-geeks who spend all their time to study and then enter the university without examination. A competition for programmers is a strange beast which is accustomed to the classical mathematics, physics or literature. But in reality programming contest is not just a workout for the brains; it’s a good start to a successful career.

It has about 40 years of Russian history programming competition. The pioneers of it were the representatives of physical and mathematical schools, universities joined it later. MAI participated in it so far as, and it was not considered as an important direction.
In the beginning of the 2000s it became clear that even the most talented young people should be specially prepared for the competitions. Trainings at the faculty "Applied Mathematics and Physics" are held in two streams. Once a week students have additional lectures, two-hour contest, then analysis and home practice. At the end of the semester they have competitions giving precious bonuses in the exams. But the biggest bonus is getting into the MAI team. Sundays students spend on coding, which is also a kind of training – some competitions are given 24 hours to complete.

During the practice students form their own teams to participate in various competitions between other countries. Next level to reach is large prestigious competitions such as Microsoft Imagine Cup, where 2-3 university teams take part with their projects. And MAI has a good chance to replicate the success of 2005 – when the MAILabs team with Fibra-system – a tool for describing, analyzing, and optimizing business intelligence processes – ranked the second place in the category Office Designer.

Professor of the MAI department "Computational Mathematics and Programming" Valentin Zaitsev admits: Our students rank the third-fifth place. However, they can reach the first and the second places and press the leaders from St. Petersburg State University and ITMO. Just notice the regular prizes in the semifinals and the finals in the ACM International Collegiate Programming Contest – world championship on programming. In the last championship MAI team took 26th place out of 128, beating participants from dozens of countries.

MAI students develop their skills in solutions of programming problems, and victory here is really not the most important. About 100 people from all over the faculty participate in competitions. About forty undergraduates form the base. Serious trainings involve some preferences – students have their own individual plans, and the participation in these competitions and scored for practice, laboratory and course work. But do not think that everything is limited to superficial measures – the curriculum changes and in a year time the boys of average intelligence can raise almost to the level of the Champions of the leading IT-universities.

– We have added more hours of programming and diminish a few hours of math, while strengthening its discrete part, – explains Valentin Zaitsev. – It allows you to focus on practical exercises and problem solving.

Another important reason to participate in the competitions is career prospects. IBM, Oracle, Google, Facebook, Yandex, Mail.ru – all IT-giants are closely eyeing the successful participants of the competition. The winners of the global competition are practically guaranteed the offers from them. The participants already know what they will deal with during recruitment. There is a famous tale about a job interview at Google. The applicant was called and read out the statement of the problem, and the arisen pause was interrupted by saying, “Well, why are you silent, dictate the code!”

It seems like the same interviews MAI graduates had: Dmitriy Fedoruk, an expert on Microsoft software development technologies, Konstantin Kichinsky, the head of multimedia search services of "Yandex", Dmitry Belyaev, the head of Mail.ru search engine development, Dmitri Kalinin and dozens more apply the knowledge obtained in the university in the world's largest IT-holdings.

On-line written codes solutions can be used only to the ideal conditions of competition. They are not useful in practice. A fourth-year student of “Applied Mathematics and Physics”, a member of the MAI Programming team Igor Grigoriev says that it’s precious to have an opportunity to improve the skills.

– It is interesting to solve complex problems and apply a variety of algorithms. The code can change, but the scheme remains the same, so you can see how your results improve. You can make the code and forget it in 2 hours, but algorithmic theoretical base is expanding. Roughly speaking, you try over and over again like a developer in the real world.

MAI students will be able to improve their skills next spring. They will take part in prestigious international competitions: Challenge24, Deadline24, Vekua Cup. The students are intensively trained. “This highly-strung work will bring the obvious benefits, at least one of the world-class team MAI will have.” says Valentin Zaitsev.