“New Year's Eve Feat” without West, but still the best 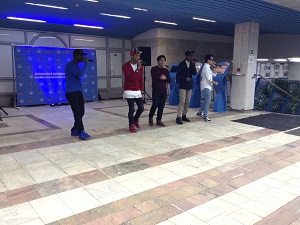 – Just five minutes are left before the big concert! Rihanna, Kanye West, Stromae ... not coming today but believe me we the party will be great! MC joked and passing by students seemed interested. No wonder – on December 21 in the lobby of the main academic building an international team of MAI and creative teams of the university made a New Year party for the students. The event was prepared by the department of technical support of the MAI media center, The Office of Youth Policy and Foreign Student Cultural Center. Olga Popkova, the director of Foreign Student Cultural Center was given thanks.

Students from Nigeria and Congo John and Oscar were to start the concert. Their performance was bright and emotional. The band ROYAL'5 with their acapella went ahead. Aida Golovushkina performed with a touching song in Tatar. Listeners tuned to a romantic, a true Christmas mood. They listened attentively and smiled.

“Foreign prince of his distant people” as MC introduced him played African drums. Exotic dance team supported him. Of course such a performance made cameras and smartphones go up. Then the attention (especially girls’) was brought to a Malaysian handsome man with a lyrical song about love. But everything ended with an amusing mix of genres: rap band “Professors aerodynamics”, a saxophone performance by the student Anton Bazaev. The mashup (mix of music, in this case – the Russian and foreign pop songs – approx.) by ROYAL'5 summarized the party leading the audience a special delight.

Sophomore Alex Labzunov carefully observed the performances. He came to be there unexpectedly – just came in the university early. He said he was lucky to join the party, to forget all the worries and to feel the New Year mood.