Water way: MAI project goes down the river and rises to the stars 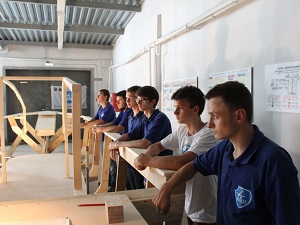 Since childhood a third year student of “Design Aircraft” faculty Denis Sukharev was attracted by two areas: medicine and aviation. He made a decision after his first flight. Denis was attracted by the view of his native Kostroma below the wing of the aircraft. All doubts have disappeared. He had the interest in not just the engineering but in design activity since childhood. He started the creation of technical documentation for his aviation wares.

His desire to be the part of Moscow Aviation Institute appeared during in competitions Denis participated in: International contests in the history of aviation and aeronautics named after Mozhaisky. A graduate of MAI Department “Design Aircraft”, Chief Designer of OKB Ilyushin Henry Novozhilov spotted a talented guy. In addition a teacher at the young technicians’ club where Denis studied was a graduate of Moscow Aviation Institute. Denis visited MAKS in 2013 and finally made his choice.

Understanding the feasibility of the project took shape on the very first day of his stay in a dormitory. He had his way down the kitchen when he met Andrew Shepelyaev who was “such as nuts” as Denis. Two or three days they spent discussing their ambitious plans and released they needed a team. E. Club

“Engineers Club” started as a community in “Vkontakte” and then began to grow rapidly in offline. At the beginning the members of the club had cooperative trips to the cinemas and theaters “in order to rally the guys”. They still have “revels but they are a little bit quieter now”. Everyone is into the project now and is supervised by the leaders of the club Denis Sukharev, Andrew Shepelyaev, Michael Shmaev, Alexander Sokolov and Daniel Litvin.

The educational process of the Club is divided into two clusters: professional and managerial ones. There is no age limit and sometimes smart but not advanced in the engineering field scholars join the club. Master classes are held. For example, work in the CAD (computer-aided design) and standard modeling programs. However 60% of the course is given to train children to create and maintain a successful project. It was easy to find engineering mentors, but they faced difficulties to find the required people from the sphere of management. The National School for leaders “Zhuravli” volunteered to help.

The members of the club have a great opportunity to consult general designers of large EDB. Aircraft manufacturers Club is among them. And it is reasonable as the project of Denis and his team is striking with its ambition.

Since childhood Denis was good at experimental aircraft modeling rather in sports. In MAI he developed his skills and knowledge in creation new structures. That caused some new ideas.

– The basis of the future intercontinental air transport is the machines using the screen effect. – says Denis and his eyes light up. – Once I had a conversation with the daughter of the famous aircraft and shipbuilder, WIG creator and developer Rostislav Alexeyev. Tatiana Rostislavovna told me about the project her father worked on during his last years. I understood his view of the future of the screen. Its use will reduce energy consumption for transportation of large goods in several times. And this is very important. More than 80% of all goods are transported by water at low speeds.

Yet unnamed hybrid of airship and WIG – that’s Denis’ project. From the first sight you want to call this machine a “screenship” or an “airscreen”. But when you know what has inspired the designer you understand this is a very serious task. And it is a possible one.

– Unlike conventional airship our flying machine has a wing shape which will create the effect of the screen, dynamic air cushion. Of course over the city there will be many obstacles and air disturbances. The machine will not be able to make flights there, but it is not important – convinces Denis. – The main thing is increasing the speed to 500 km/h in combination with high load capacity and shorter or vertical takeoff and landing.

Testing technologies will start with water transport, more precisely with electroboats. Creating an entire transportation network is accelerated in Europe where they already have 16 boats in Rotterdam but such boats work on the generator not on the battery.

– Our goal is to connect the settlements by water passenger transport, – says Denis seriously. – The speed will reach 20 km/h. This will significantly relieve the roads. Our transport will connect the pier in the village and pier located, for example, not far from the city center. However electroboats can be run without creation any infrastructure – it can reach any bank.

The most important for us on this stage are testing electric motor and design approval. It may seem ridiculous for us but the Europeans really appreciate beautiful stylish creations. We will also put our machines on the Volga. That is why we cooperate with the students and teachers of the department “Design means of transport” of the Stroganov University.

It is momentous not only design. Denis showed me diagrams, calculations and info graphics and most importantly – a model photo he made last summer in ratio of 1:1. Denis’ team has partners – representatives of other spheres. They are ready to work together. Water transport network in the urban canals and rivers of the plains is already in sight of investors. It will cost 15-20 million rubles to create a 12-14 seats’ boat. 200 machines will cost one and a half billion. But it is the minimum necessary to conduct market research, emphasizes Denis. Everything will pay off in three to four years.

Of course there are some restrictions in the use of electoboats we need to pay attention to. Cruising range from the local point cannot exceed 40 km. The boats are useless in winter. But Denis already has a way out: air cushion bags are the next stage of technical evolution of his project.

Air cushion bags should not be located on the same platform. The boat will have several small ones. Thus will provide the resistance to external influences and increases its efficiency. It is the same electroboat in its base form but with the use of aerodynamics. This new machine will have a form of fuselage. Caring about the environment Denis wants to deal with plant materials which still need to procure.

From the drawing you can see how Denis slowly gets to his goal. Such boats will be able to work up to ten hours and be used off-season. Denis plan his machines will run in parallel complementing each other at different distances. Preliminary design will be ready for the New Year. The first launch of the machine is planned for 2018.

– Oh! I forgot to tell you about our electrocatamaran! – casually remarked Denis. – This one is for tourists. USS Enterprise

– And what's that? – I glanced at the picture of a beautiful machine. It reminded me of iconic starship from Star Track. Dennis blushed confirming my guess. – Enterprise?!

– Well, yes, my childhood dream – he smiles. – This is of course won’t dome by me but the idea is mine. It’ll fly into space.

– You call those flights?! – He shrugs. – We timidly reach only a close orbit. I dream of space transport being as household and habitual as modern trains and cars.

– Then what are all these WIGs, boats and catamarans for?

Denis wonders: – Do you remember the book “The Little Prince"? The main idea is that’s impossible to explore the space and create an interplanetary transport we cannot build and equip intercontinental one on our own planet.

How are we going to explore the space and create an interplanetary transport, if we can not build and equip intercontinental on his planet?