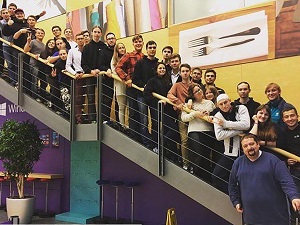 Alexander Popovkin, the lecturer of the department “Calculating Mathematics and Programming” was attracted to work in Moscow Aviation Institute for a specific task – the biggest international competition Microsoft Imagine Cup. Three teams of the university he used to work before reached the final in Russia. They took the second and the third places in the category “Social projects”, and the third and the fourth places in the category “Games”. Alexander refused Google and Yandex offers to join them. And it seems he does not regret it.

Official opening of the Imagine Cup was held on December 16 but the preparation for the contest in MAI began long before. MAI already has four teams formed. The participants exactly know what they want to develop in the competition. Moreover Alexander arranges master classes and seminars for his students conducted by the representatives of leading Russian and international IT-companies. He refuses to speak about his own projects but assured that MAI has all the chances to win prizes on competitions.

Imagine Cup is not the only project where MAI students participate. Microsoft Student Partners (MSP) is a global educational program, the point of which is to select the most talented students. Microsoft provides them with the information about its latest products and organizes different workshops, hackathons, competitions and other events. Initiative is only required. MSP is sometimes praised, sometimes criticized, but the main goal of it is to promote the technology. Students must be actively involved in this.

It’s no wonder MAI students are involved in MSP. Alexander Popovkin is the Russian coordinator of it. You need to pass the test to become a participant. “It’s not difficult”, said a magistracy student the faculty “Applied Mathematics and Physics”, a MSP-participant, chairman of the Student Commission Jaroslav Aleynikov. He took part in Russian MSP-summit.

– It was a cool and ritzy – Jaroslav recalls. – We had lectures on the very first day, next day we had a master class from the representatives of LEGO how to create robots, then we had some more interesting lectures, and on the fourth we were told about HoloLens testings (augmented reality glasses from Microsoft – approx.).

Jaroslav was initiative. On the third day he organized courses of streaming coding – lifecoding. This is an online broadcast during which viewers are watching what is happening on the monitor host and ask questions. Streaming is much more effective than conventional training videos. You can just ask a question and receive the answer immediately. This idea came to Yaroslav long ago, and he began to implement it. He summit held a lecture for all the Russian students in a week. Then he picked ten people who had meetings and were doing test runs. So now everyone who wants to learn the coding can simply mind the loop streams.

Freshman Maximilian Spiridonov got acquainted to MSP at school from an article on the “Habrahabr” but he was attracted with it. Maximilian started to code in the fifth grade; then he visited some special courses. When he was a senior he got a job in the local IT-company (Maximilian is from Kaluga). This gave him a significant advantage. It’s easy for him to study at the faculty of “Applied Mathematics and Physics”. And here MSP has already attracted him – he "saw it in business".

Maximilian participates in other activities of the program – within the Microsoft Developer Tour at universities he holds master classes in C # (C Sharp). He talks about the programming so enthusiastically that one might suspect that he thinks it.

– Programming is a method of projection of reality – confirms Maximilian. – The programmer looks at the world through patterns and templates. You see an elevator and I see a static array and an integrator.

I feel oppressed with unfamiliar words, I awkwardly shift from foot to foot and Maximilian immediately observes: – You stand asymmetrically, not in the middle of the tile. You should not go beyond the allotted class – he strictly prints in addition. I shudder.

Alexander Popovkin vehemently denies the proud title of IT-evangelist. This title belongs to Dmitry Soshnikov, a graduate of Moscow Aviation Institute, an associate professor of MAI and the Higher School of Economics, a coordinator of academic programs department of strategic Microsoft technologies, a renowned expert in the field of logic and functional programming and artificial intelligence, a blogger. Alexander is not limited to classes for students – he promotes IT among pupils.

The event “Hour of Code” was organized by the Ministry of Communications and the Ministry of Education in 2014. 7.1 million Students took part in it; the number of participants has grown to 8.3 million in 2015. University professors and representatives of industry organizations visit programming workshops. The main thing is to promote and developer programming among schoolchildren.

– Wait, – I cried in bewilderment – but is it enough so popular? The whole world is now rotated to IT, it is called the future of mankind, it is popular, it is fashionable and, in the end, well paid.

– We loop through all the modern trends which companies invest in, we offer to participate in competitions. Pupils are very motivated. Yes, and so are we. It’s nice to know that you may have given impetus to the future Brin and Zuckerberg – Alexander smiles.