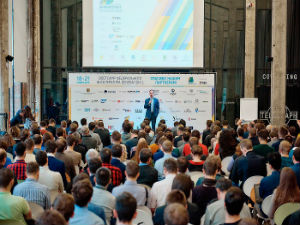 Software to control 3D-printers was developed at the Moscow Aviation Institute (National Research University) in the laboratory of additive technologies.

A promising programme that will automate and reduce the stages of technological preparation of products was presented in Phystechpark by Veniamin Brykin, laboratory engineer and Alexander Sharmanov, project manager. The guys performed in the track "Technet" of the startup competition "Generation S" and successfully passed to the 2nd round, which will take place in Rybinsk on the basis of NPO "Saturn". It should be noted that a universal programme can compete with foreign analogues.

No room for error

Businesses adopted additive technologies long ago. But the high demand of manufacturers often confronted a long chain of technological preparation. At some stages of the algorithm decisions were made by an operator and thus notorious human factor caused errors, delays and other unpleasant cases.

The way out of the situation was suggested by the members of the MAI faculty "Applied mechanics". Rushana Anamosa, Stanislav Vasiliev, Sergey Zelenov, Veniamin Brykin and Alexander Sharmanov guided by Andrey Ripetskiy, assistant professor of Department 904 created their own software for 3D-printers on the basis of the laboratory of additive technologies founded in 2011.

— To print a component printer needs a control programme. It’ll tell the machine where to move the laser or the printing head. — Veniamin Brykin, the engineer of laboratory of additive technologies says.
— A programme is a set of coordinates, graphic code. It is obtained by means of algorithms — the programme using its algorithms turns a model into a set of instructions for the printer.

MAI students managed not only to create a universal programme, but also to significantly improve it.

— There are several additional modules as a bonus. For example, simulation module. It simulates the 3D printing process on the computer. — Veniamin says.
— It’s a kind of preview: the programme will show the look of the product after printing. In addition, the programme includes a function of automatic layout of the chamber: it allows to rationally arrange the parts in the chamber. Another module is for automatic modeling of casting molds. We upload a three-dimensional model of the desired product and the programme calculates the printed form for this product.

The developed software consists of a main module with its own graphics core and interface and a set of additional plug-ins to address not only technological, but also engineering problems. We should note that the software modules solving the problems of additive manufacturing available in the market today are owned and sold by large foreign companies and apart from the high price those software products are closed to the Russian industry in terms of efficient use of algorithms for solving knowledge-intensive tasks in the development of new models of the promising technology.

Compared to many members of the accelerator "Generation S" Alexander Sarmanov and Veniamin Brykin had the advantage of a ready-made project, which can be sold in the software market even today. Within a few days, from 19 to 21 November, MAI representatives got acquainted with other participants' projects on the territory of the DI Telegraph and Phystechpark. In informal communication with investors, experts and technological partners of the event they refined their project. Soon the designers will go to NPO "Saturn" for two weeks, where they will be taught to develop effective business models and to avoid fatal mistakes of positioning a new product in the market. After this course the MAI representatives will go to St. Petersburg, where the fate of the startup will be decided — will the programme get desired support and funding?

— In any case we have already won, — Veniamin Brykin says.
— Meetings, presentations, consultations with investors and experts have enabled us to draw attention to the product and to create its positive image. I hope that we managed to form an offer that will interest business and industrial enterprises.