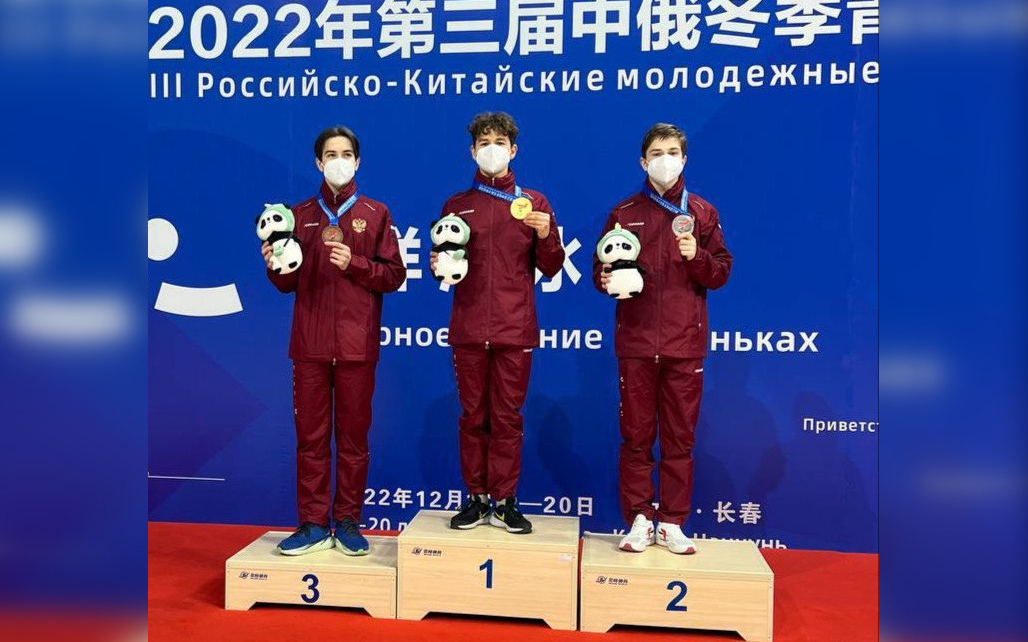 Figure skater Grigory Fedorov, a first-year student of Institute No. 3 "Control Systems, Informatics and Power Engineering", won second place at the III Russian-Chinese Winter Youth Games, which were held from December 14 to 20 in Changchun, China. Six athletes competed in single skating – three from Russia and three from China.

It is worth mentioning that Russian team brought home 93 medals in total (31 gold, 31 silver and 31 bronze). In speed skating Russians won the biggest amount of medals (25). The competitions were held according to the ISU standard (short and free programs). Grigory scored 212.10 points, losing only 1.18 points to the gold medalist.

– The performance in the free program was unsuccessful, I made a lot of mistakes, – Grigory tells about the competitions. – However, I am glad that I managed to perform an attempt of a combination of a quadruple lutz and a triple axel. I also skated the short program without serious mistakes.

Grigory is a native Muscovite, he comes from a large family. He started skating long ago, but he admits that awareness and love for this sport came only "at a more conscious age, when I was 13-14 years old." Nathan Chen, the champion of the Olympic Games – 2022, 3 times the world champion, is among his favorite skaters.

– It was my first visit to China. Unfortunately, due to quarantine measures, it was impossible to learn more about the country. It was even impossible to walk around the city, - the MAI resident notes. — Nevertheless, I liked the way the competition was organized. I would like to note the openness, kindness and friendliness of athletes and volunteers from China, it was a pleasure to talk to them.At MAI, Grigory studies in the direction of "Control in technical systems". He admits that he chose the direction basing on his scores for the Unified State Examination, thinking about what he might decide to connect his life with in the future, in addition to sports.– Every child in our family tried himself in figure skating. I have three brothers and a sister, I am the second child. Now I am skating, as well as two younger ones, - the young athlete shares. – My mother loves figure skating very much and in her childhood she did it as an amateur. First, parents sent my elder brother to skating classes, then the rest of us took over.At the end of 2022, the Russian Figure Skating Championship was held in St. Petersburg, where Grigory became the winner of the individual tournament, performing two quadruple lutz in the final.– We started from the rules of the jumping tournament and decided that I should perform a quadruple lutz there that would bring the biggest points, which I got quite consistently. I did everything without mistakes, and that is how I managed to win, – he says.Championship of Russia is the next for him to take part in, it will be held in February.“As for my plans for the future, I can say that I will skate as long as it brings me pleasure, regardless of the results,” the student concludes.
Students Sport