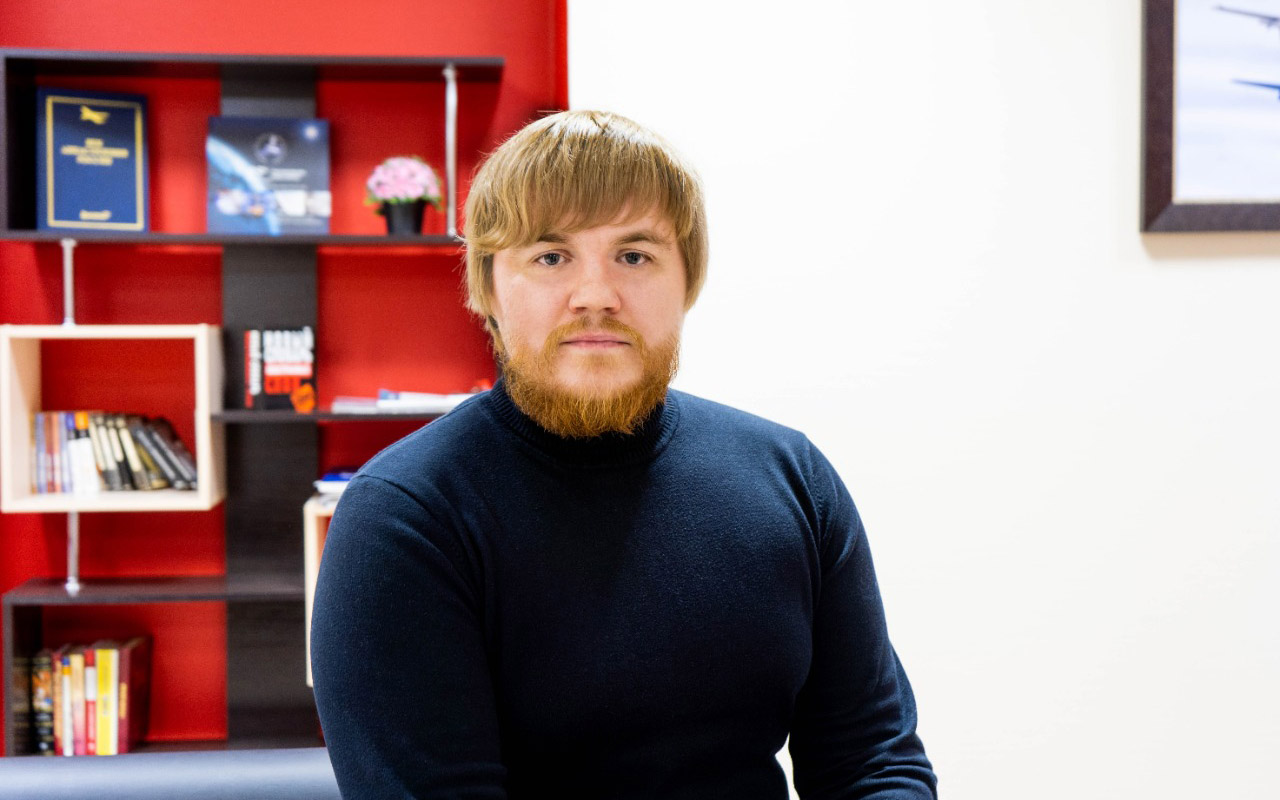 Assistant Professor of the Department 602 "Design and Strength of Aircraft Missile and Spacecraft" of Moscow Aviation Institute and senior researcher of the Institute of Applied Mechanics of the Russian Academy of Sciences (IPRIM RAS) Sergey Russkikh is working on his doctoral dissertation, and he offers innovative solutions to important fundamental and applied problems in the area of linear and nonlinear mechanics of controlled spacecraft.

One of the applied problems that he is working on is the terminal control of mechanical elastic systems. That means the change of the position of the system from one point in space to another in a given period of time. During the process of the position change sufficiently strong vibrations occur, and they might lead to breakdown. Sergey decided to find out how to invent more efficient ways to solve the problem of residual vibration through physical impact. The methods proposed are unique from the point of view that they make it possible to obtain simple control impulses convenient for practical implementation and to control systems with variable parameters and nonlinear unsteady vibrations.

At the same time, the solution is universal: it might be applied both in the outer space and in terrestrial or airless space.

The main task is the selection of the control impulse. Previously, in the works of well-known scientists in the area of robotics and space systems, approaches proposed were based on the decomposition of the impulse in terms of natural vibration frequencies. In this case, the pulses were obtained with high frequency and are not convenient for practical use. In the complex work of the scientist, several approaches are proposed for various systems.

For linear systems with constant parameters, the expansion of unsteady motions in terms of natural vibration modes (the so-called solution in normal coordinates) is used, the resulting equations are solved analytically exactly. In this case, the control action is sought in the form of finite series of finite functions of time that are simple from the point of view of the implementation. For such systems that perform multiple operations of the same type, the elimination of oscillations at the end of each operation with the help of one “simple” specified control function is carried out by “tuning” several lower natural frequencies of the system oscillations to this function by varying the system parameters.

For the nonlinear systems or systems with variable parameters, the scientist for the first time proposed the approach based on the decomposition of generalized coordinates of the system according to given basic functions of time with unknown coefficients, which are determined by the Bubnov-Galerkin method in the time domain. This method allows to reduce the solution of a differential equation to the solution of a simpler mathematical problem. The control function on the control interval is searched for in the form of a finite series of sinuses. All generalized coordinates should be decomposed according to time functions known in advance with unknown coefficients. Moving is laid out the same way. Nonlinear algebraic equation comes as the result, solving which we get coefficients that determine the angles of rotation and the parameters of the control action. Thanks to this method, the vibration will be damped not only in terms of movement, but speed as well.

— This is a practically oriented fundamental work and that is its main distinctive feature. There are new original methods that are simple enough to be easily implemented in practice — the scientist notes.

Enterprises that are engaged in the production and operation of appropriate equipment have already shown interest to this development. The Rocket and Space Center "Progress" noted the special practical benefit of the abovementioned methods.