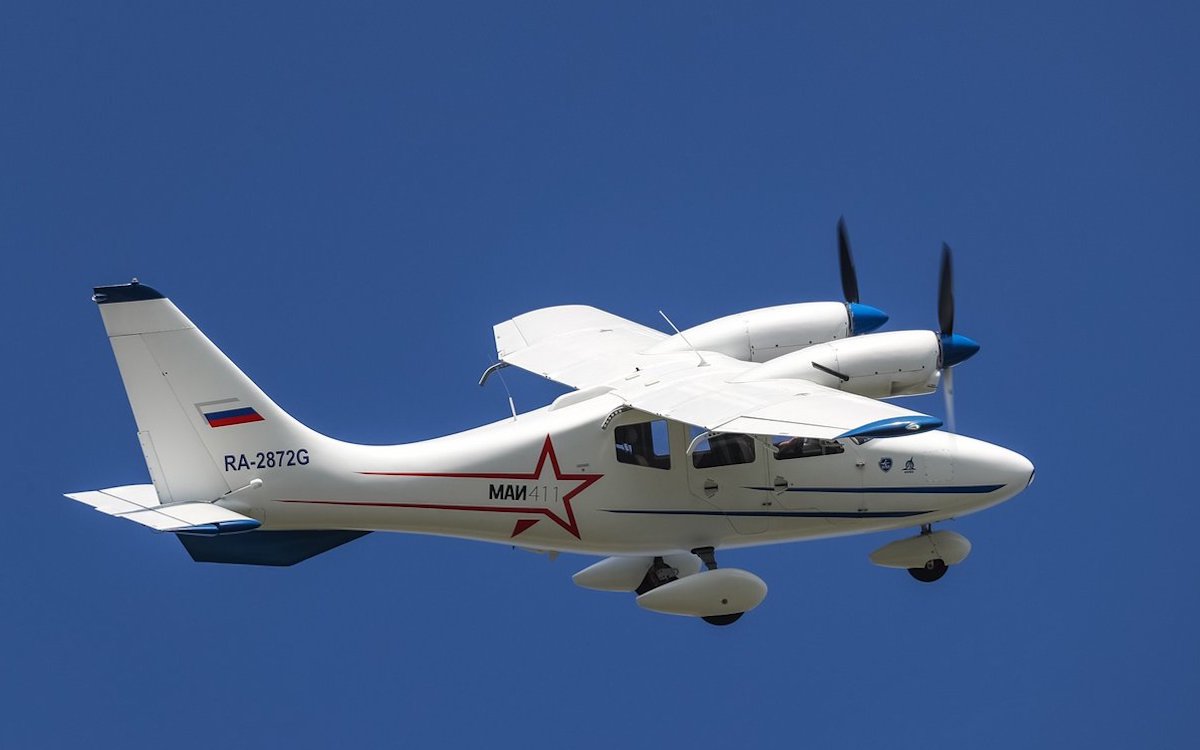 Alfa-KM (MAI-411), a four-seated aircraft made by Moscow Aviation Institute and the Kizlyar Electromechanical Plant, was presented at the Army-2021 international military technical forum. One can get to the high-mountainous regions of the Republic of Dagestan on this airplane much faster than by car. The aircraft can reach the speed of 290 km/h, its cruising altitude is up to 3.000 meters.

Before the Army-2021 forum experts checked the MAI-411 in local conditions. It flew from the Kizlyar plain to the high-mountainous village of Machada in the Shamil region, that is located at the altitude of 2.000 meters – the highest-mountain runway in the region was built here. The flight lasted two and a half hours; it takes six hours to get there by car. Between Kizlyar and Machada there are about 300 km, while half of the way goes in the highlands.

Alpha-KM (MAI-411) was designed and developed by the Special Design Bureau for Experimental Aircraft Manufacturing Branch (OSKBES) of Moscow Aviation Institute. In 2019, the aircraft was tested in accordance with FAP-118 and received the airworthiness certificate for a single prototype. It appeared in the flight program at the MAKS-2019 air show. The total investment to the project amounted to about 200 million rubles.

“We cannot do without such planes. It is impossible to develop Russia only with cars and trains – there are no comfortable roads everywhere. Flying on military vehicles over many countries, I watched light aircraft fluttering over the ground like butterflies in a meadow – and there are a lot of them. We must study the experience of Canada and Alaska. We have a governmental decree on the development of small aircraft, but practical steps are also required, for example, the creation of a unified management structure for this system. Take the North Caucasus. There are many airfields, but some of them belong to the Federal Air Transport Agency, others to the Ministry of Defense, and others to local administrations. All of them are to be integrated into one system. We should develop a state program with funding. And after that it would be possible to get from Makhachkala to Vladikavkaz not in six hours by car, but in an hour by a light-engine plane. Sergei Melikov (acting head of the Republic of Dagestan - ed.) and I recently discussed this issue in detail. He initiated the development of small aircraft in Dagestan, and if the heads of neighboring republics join him, the North Caucasus would be able to set an example for Russia in this pressing socio-economic issue," – Tolboyev said.

Magomed Tolboyev clarified that the production workers managed to take a significant step in the development of small aircraft:

“Ibragim Akhmatov, General Director of JSC Concern KEMZ, did a lot to implement the project – I only helped him to establish professional relations with the Moscow Aviation Institute. Before that, we produced airplanes with one engine, that was used for agricultural needs. This plane is already a commercial plane. Such aviation is the future, but time must not be lost, otherwise other countries will occupy the niche”.

The light twin-engine aircraft "Alpha-KM" will be useful not only in the "country of mountains" (this is how the word "Dagestan" is translated from the Turkic languages). It will be irreplaceable in the steppes, deserts, in the taiga – where the roads and railways have not yet run. In Dagestan, the tourism industry is pinning its hopes on the Kizlyar plane. Small groups of tourists can not only quickly move around the republic, but also make introductory flights over picturesque mountainous places. The aircraft will be able to carry out air patrols, engage in aerial photography and transport people.