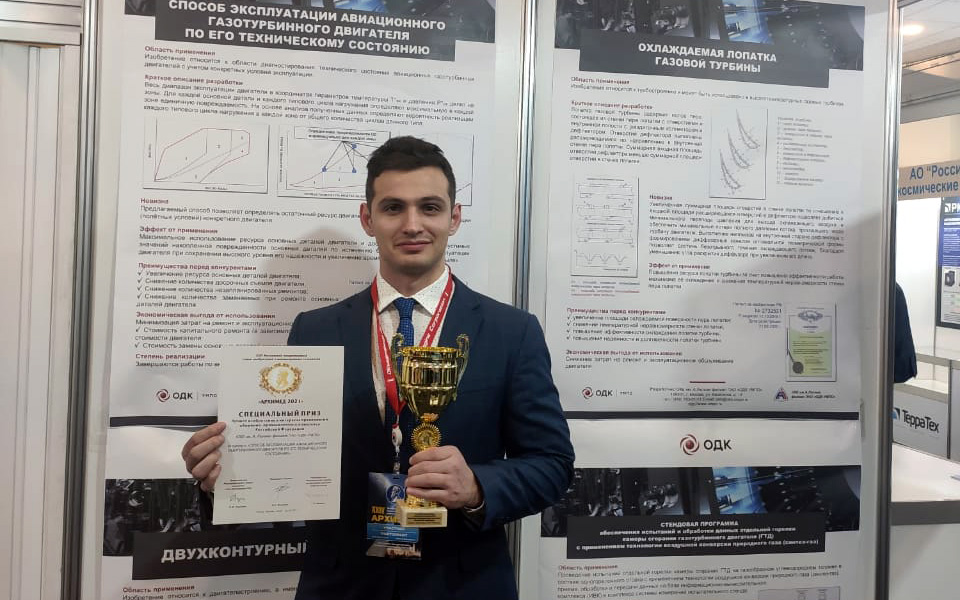 On March 23-26, Georgy Gogaev, postgraduate student of MAI department 203 "Engine Design and Construction", project engineer of the Experimental Design Bureau named after. A. Lyulka (branch of PJSC "UEC-UMPO") took part in the XXIV Moscow International Salon of Inventions and Innovative Technologies "Archimedes-2021". The event took place in Moscow at the Cosmos Hotel. Representatives of the community from 19 states and 33 regions of the Russian Federation, who presented over 600 exhibits (inventions, industrial designs, trademarks, innovative projects), were its guests.

“Aircraft Gas Turbine Engine Operation Method According to its Technical Condition” presented by Gogaev, won the nomination “Best Invention for Enterprises of the Military-Industrial Complex of the Russian Federation”. Currently, there is premature exhaustion of individual resource limitations of engines being observed at several objects, leading to their early removal due to the necessity to undergo the unplanned overhaul.

The method proposed will allow the most complete use of the resource capabilities by taking into account the peculiarities of the operation of each engine. It is important to note that at present, the invention is already being introduced into the engine serial operation.