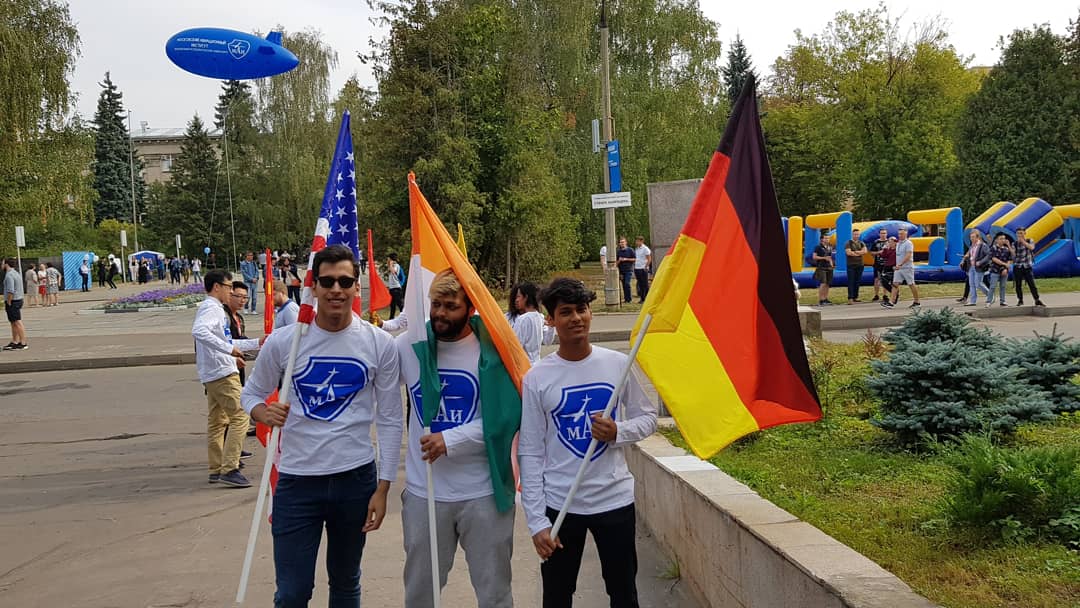 For several decades, Russian scientists had been proving to be world pioneers in aerospace engineering, yet the international cooperation with foreign research institutes and industrial companies was highly restricted. As the so-called “iron curtain” fell in the early 1990s, with a blink of an eye, an undreamed-of chance to learn the approaches of the Russian engineers appeared. The Russian engineering schools with rich and unique scientific background started gradually opening their doors for the global community of aerospace industry and academia. Since then, the Russian approaches in research and education initially built on the soviet traditions have been modernized, making Russian technical education even more attractive for international students and researchers.

One of the great examples of how Russian education has advanced is the progress made by the Moscow Aviation Institute, the highly reputable institution that trains professionals for aviation and space industries, one of the leading engineering schools and the top aircraft and rocket engineering school in the region. In2015, the university opened highly demanded English-taught programs in “Aircraft Engineering”, “Spacecraft Engineering”, “Propulsion Engineering” and “Control Systems and Computer Science for Engineering” and thus internationalized the valuable Russian expertise gained in those fields.

This motivated ambitious young engineers interested in the aerospace industry from all over the world to gravitate towards MAI. For the last several years, MAI has been very popular among Indian aspiring engineers.

We talked to a couple of talented MAI fellows from India, who study aerospace technology, to see what they think about modern Russian education for an aerospace career.

Georgi Mohan Jagthap and Anmol Khan graduated from MAI’s English-taught bachelor program in “Rocket Complexes and Cosmonautics”, and are preparing to pursue their masters there too.

Both Anmol and Georgi come from North India (Georgi is from New Delhi, while Anmol arrived from Dehradun) to Moscow driven by a dream of becoming rocket scientists.

“As a child, I was a huge fan of “Star Wars” series and since then I have been interested in space. What motivates me to study rocket science now is my dream that one day I will contribute to human space flights, so that people travel to different planets and leave the Solar system. It is time for humanity to prepare for extraterrestrial expeditions and adventures”, Georgi says.

When the time to select the university came, Georgi found the Rossotrudnichestvo office in India and contacted them to learn how to enter MAI University. “I was very determined to study exactly in MAI because many people advised me and also my father had a chance to visit the University during his business trip to Moscow and had very positive impressions from the establishment. Then, I visited Rossotrudnichestvo in New Delhi, and they helped me with the admission process. You should definitely contact them if you plan to come study in Moscow”, he insisted.

Georgi was a lucky one, his grandmother was from Russia and taught him the Russian language when he was a kid, so when he arrived in Moscow he already knew the language and felt completely at home.

“What I really love about Moscow is the architecture and parks. Also, I like snow and the Moscow weather during winter”, he comments.

Yet Anmol, his girlfriend, whom he met at MAI, did not know the language at first, her integration into the Moscow lifestyle passed smoothly.

“I knew that many cosmonauts graduated MAI, and also my father’s friend was an MAI graduate and recommended me to apply there if I wanted to dedicate myself to the aerospace industry. Therefore, I enrolled and came to Moscow. What I immediately liked about the city was the public transport system. It is so well organized, always on time, that even if you do not know this place, you can easily navigate here. I also love Moscow for the big variety of restaurants, museums – you can always discover new interesting places here”, Anmol mentioned

As soon as their classes started at the Moscow Aviation Institute, both of them knew, it was exactly what they wanted to do in the future.

“We simply loved all of our professors, one of our favourites were Pr. Nurulayev, who taught “Aerospace System Engineering”, “Spacecraft Design”, and reliability of spacecraft, and Pr. Zakharov”, the couple claimed. “The best part is that if we struggle to understand something professors invite us to the labs, and demonstrate to us how everything works in real life. We see the application of what we learn using the equipment and technical facilities of the university. You don’t get that experience in most of the universities”, they added.

By the time Anmol finished her Bachelor, she firmly decided to become a space system engineer to improve the reliability of the small processes and details of spacecraft for safer flights and operations. In between, Anmol and Georgi did internships. Anmol flew to India to take an internship focused on the research of axial compressors in aircraft engines, while Georgi had it at the MAI experimental plant and the Russian “Vympel” company, during which he was excited to learn how missiles and rockets work.

Moscow not only gave these young people to receive an excellent education and do exclusive internships but also to find soulmates and stay committed to Indian traditions like celebrating Holi and Diwali.

Aamer explained to us the reasons why he had selected the Moscow Aviation Institute to study aerospace engineering.

“First, when I was doing my Bachelor back in India in aeronautics the name of MAI national research university of Russia’s name came up multiple times. I knew that India had tight ties with Russia in that industry, the two were cooperating in building and testing missiles. So, very soon it got obvious to me, that if Russia is helping India with rocket science and MAI University always shows up in the field, then it must be really good at it.

Second, when I looked closer into the university, I saw MAI is one of the very few institutions where 100% of the subjects you study are related to the topic, and all those disciplines are exactly what you need to work in the industry in the future. The faculties are divided based on what you want to study and all the subjects taught there are related to that particular spherе, which is great. With all due respect to the European education, in France for comparison, irrespective of the program you choose, you have the curriculum with your major, which is let’s say “Spacecraft Engineering”, but there are also many side subjects that are not related to the sphere whatsoever, and which you will never use if you work in rocket engineering. The MAI University’s curricula are always straight to the point that is why I decided to study rocket science in Moscow”, Aamer said.

While describing his impressions from the English-taught programs in Moscow Aviation Institute, Aamer noted that they are improving from year to year, so every year the international students are having a better and better experience.

“I was the first to join the English program in Rocket science in 2016 together with my student fellows, and even though it was a new program, all the professors had a decent proficiency in English and were always extremely helpful to make sure we understood them perfectly”, he added.

As a promising student, after the 1st year of his Master’s for 4 months from July to October 2017, Aamer worked in Germany at the Deutsches Zentrum für Luft und Raumfahrt (DLR), which is the German Aerospace Center. The centre has two branches operating in rocket manufacturing, in Koln and in a small town called Lampoldshausen, close to Stuttgart. Aamer worked in Lampoldshausen calculating the rocket fuel emissions in the name of that company.


He told us that among 40 employees of his department in DLR, 20 people turned out to be MAI alumni. Even one of the seniors was also an MAI alumnus by the name of Dmitry –it was the Director of his department. Once Dmitry learnt that Aamer was studying at his alma mater, he started dropping him off at the GLR every morning making sure he is not torturing himself by cycling up the hill to work. Another MAI graduate he told us was a man from Brazil in his early 30th. When had he just entered MAI, all the courses were in Russian, yet he was so determined to study there that he learnt Russian. That person then became Aamer’s internship guide in DLR.

“As a junior fellow at DLR I knew that the MAI community in that German agency was always there for me”, Aamer marked in grateful appreciation.

While doing his PhD in MAI, Aamer gains experience as an academia staff too by combining his research with teaching at this University.

“I have many students from India at MAI. By far, I am the only Indian professor over here, but by the beginning of the next academic year, two more MAI graduates from India will join me.” Aamer also touched upon his plans: “I am finishing my PhD in 3 years and after that, I hope I could stay here. I absolutely love Moscow, and even if I go back to my country, I will gladly become MAI ambassador”.

At the end of our lively talk, Aamer told us that if anyone wants to succeed in his career in aerospace engineering, the most important thing is just to stay focused.

“When you are super-focused, professors and mentors notice it and will do anything to help you out. And if you want to make a successful career in rocket science, then MAI is the best place for you”, he recapitulated.