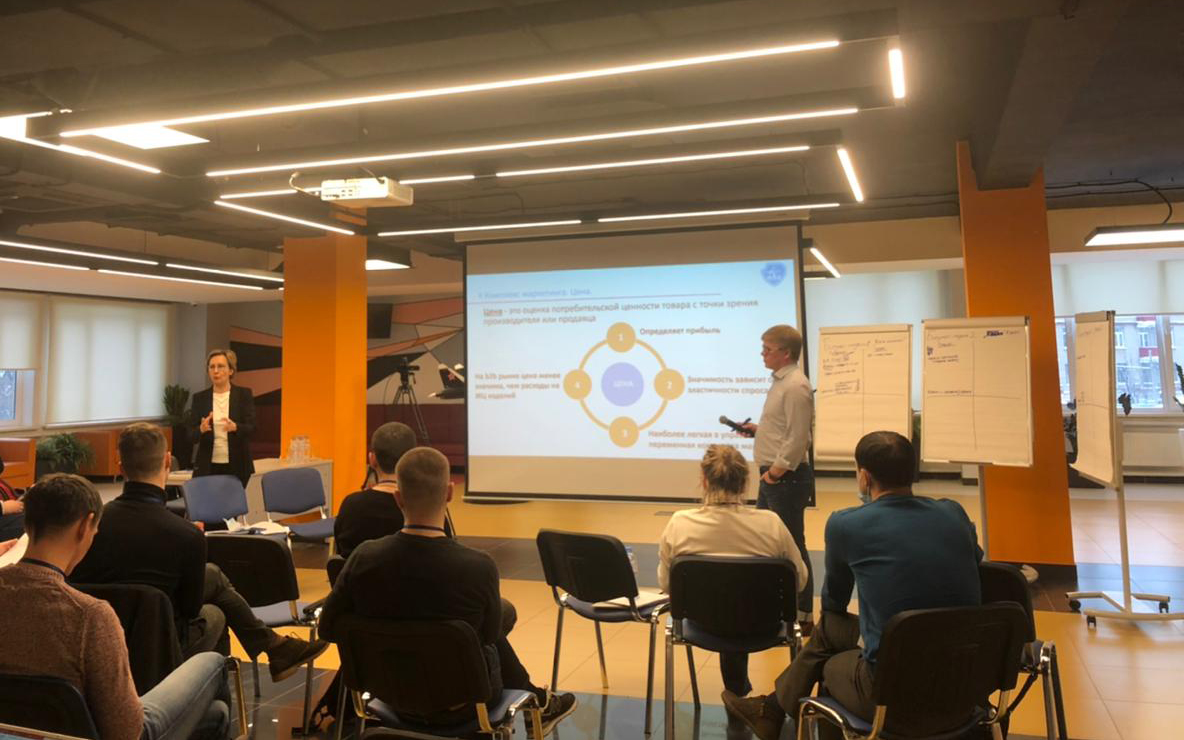 The first module of the Lean-school called “Small spacecraft serial production organization” has been completed in MAI. The program had been launched for the employees of the JSC “Academician M.F. Reshetnev Information Satellite Systems” (ISS-Reshetnev Company). Members of the “IoT Marathon” project team are taking the whole course.

Although the main aim of the program is the formation of the approaches to the organization of small spacecraft serial production, in compliance with the principles of the Lean thinking, the first module was devoted to the development of a project business model and the allocation of the product value. That is why, in addition to the developers of the program from the Prospective Production Projects Directorate, headed by Valentina Sizikova, the Space Systems Directorate represented by Leonid Komm and the “Marketing” competence center, represented by Svetlana Isaeva, were also responsible for the content of the module.

“Lean-school is the program that on the one hand solves specific production tasks, and on the other hand provides the overview of the project in general from the point of view of its business prospects”- says Dmitry Kaisin, the Director of the Prospective Educational Programs Directorate – “Systematic interaction between the developers of the program and MAI competence centers targeted at the creation of the modules allows to achieve good results and efficient technology for the project work”.

To reach the parameters of the serial production model at the end of the module, the ISS-Reshetnev Company project team explored the issues of the service market analysis: the participants considered possible services on the base of the orbit group and specified the requirements to the “Marathon IoT” system from the viewpoint of the aerospace market requirements. To represent the “voice of the market”, the potential operators of the system were invited - Valentin Anpilogov, Deputy General Director of JSC “VISAT-TEL”, Alexander Balyuk, Head of the Department for the Implementation of New Technologies of PJSC “VimpelCom” and Vladimir Shkvarin, Head of IoT Engineering Development solutions of the B2B and R&D innovation service of JSC “Er-Telecom Holding”.

In the end, the participants presented their business-models to Nikolay Testoedov, the General Director of ISS-Reshetnev Company. Their proposals on the business models will allow the company to conquer prospective market segments of the aerospace services.

Further at the Lean-school, the participants will have to develop the concept of continuous production, determine the supply chain requirements, form approaches for lean planning and process management from the place of value creation. The program consists of six modules in total, the last is planned to be held in June 2021. The modules will be both at the Moscow Aviation Institute and the JSC “Academician M.F. Reshetnev Information Satellite Systems”. It is planned to conduct an internship at the production site of the branch of JSC “Irkut” Corporation - Regional Aircraft” in Komsomolsk-on-Amur during the fourth module. The participants of the Lean-school will get acquainted with the production line under the guidance of Valentina Sizikova, who developed the approaches to the production line at this enterprise. As a result of the training, the participants will present the model for organizing serial production of small spacecraft to the ISS-Reshetnev Company’s management.