Alexey Avdeev, Director of the Rocket and Space Technology branch of the Moscow Aviation Institute, is a young scientist who is passionate about his work. During the period of his work in MAI (since 2010) he was awarded with the prize for support for the talented youth, established by presidential decree, for the best scientific work on priority directions of development of the Russian economy; medal of the rocket-space corporation "Energy" for the best scientific work done in the framework of the contest "Youth and the future of aviation and space exploration"; medal. Yuri Gagarin of Federation of cosmonautics of Russia for merits to the cosmonautics; medal of the Russian Academy of Sciences with a prize for young scientists of Russia in the field of "Physical and technical problems of energy".

Currently the scientist is working on a project that is now relevant for the space industry. He creates a laser that can be used to solve three important tasks simultaneously: cleaning debris from the orbit, recharging spacecraft batteries, and environmental monitoring of the atmosphere. Alexey Avdeev told us what the features of this work are.

You are the graduate of the faculty "Comet", which was part of the branch "MAI Rocket and Space Technology". Tell us, what was your path from student to branch Director?

As for today already half of my life — 17 years-is connected with the Moscow Aviation Institute. First I was a student of preparatory courses, then I became a student and from the fourth year I started teaching as an assistant. Starting from the sixth year, I began to study science as a senior technician at the research and education center (REC) of MAI,"Energy and physical systems" which was headed by RAS academician Boris Katorgin. Then, as a graduate student, I continued teaching as a senior teacher, and working in the REC — as a junior researcher. Boris Katorgin became my research supervisor in graduate school.

After defending my PhD thesis, I became Deputy Head of the Department of MAI, that was created on the basis of the research and production Association "Energomash" named after academician V. P. Glushko. Although there were about five times fewer employees, teachers and students at the Department if compared to what we have now in our branch "Rocket and Space Technology" in Khimki, which I have been managing since 2017, this experience certainly helps me today. By the way, I am happy to continue my teaching and research activities as an associate Professor and Senior researcher at the faculty of Aircraft Engines at the MAI.

I like working in the Institute. Today it is prestigious to be not only student of MAI, but also an employee. I feel like I’ve found my calling. And I am immensely grateful to Boris Katorgin: I consider him to be my teacher not only in science and administrative work, but also in life. 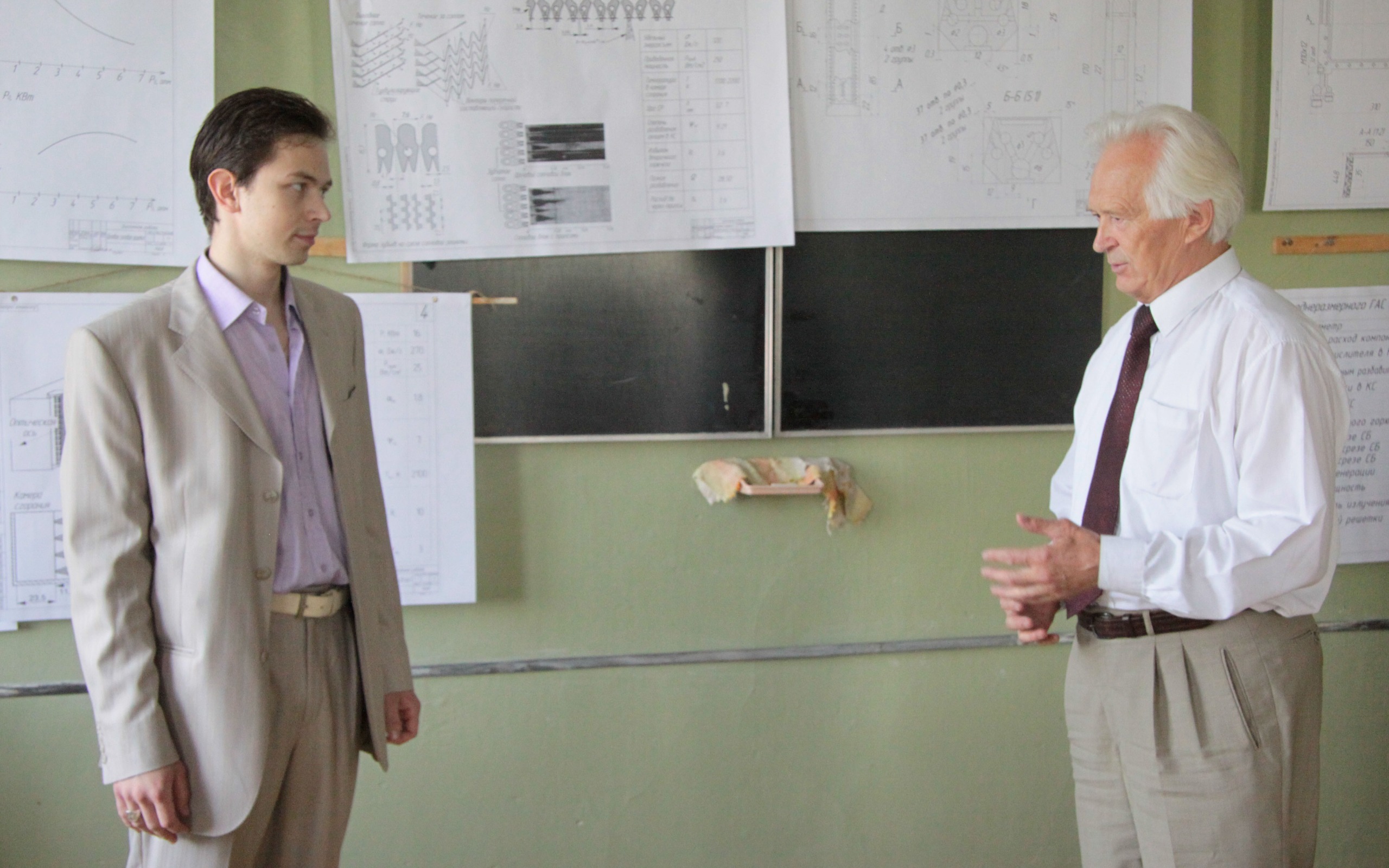 How did your work on the space laser begin and what was the basis of the project?

As part of my graduate work under the guidance of Boris Katorgin, I considered the creation of a multifunctional space-based laser power plant based on various types of lasers. In our further work, we proved the feasibility of hydrogen fluoride continuous chemical lasers (NHL) application, created in NPO Energomash, on such installations.

My interest in continuous chemical lasers is associated with the possibility of efficient direct conversion of the internal chemical energy of substances in storage tanks into coherent radiation, bypassing other stages of conversion. NHL’s efficiency is significantly higher than other lasers, giving them unattainable high radiation power.

What tasks does your project consist of?

The aim of this work is to theoretically study and create a system with the generation of radiation not in continuous, but in pulsed-periodic mode (IPR) on hydrogen fluoride chemical lasers with continuous pumping. This is of great interest in applied terms. The average laser power in the IPR is lower than in continuous mode, but the peak power of the pulses can be ten times higher than the power of continuous radiation. The high average power inherent in the NHL will allow for ultra-high peak power in the pulse in the case of IPR implementation.

The IPR regime in the NHL is currently being poorly understood. It was first theoretically considered in the USSR in 1979. Since then, interest to this topic has not faded, and theoretical and computational researches are being conducted. However, in the open literature today there are no system solutions for obtaining high-frequency super-powerful pulses in practice, despite the fact that their scope could be very large.

What applications of your power plant are you considering now?

We have shown the possibility of placing a power plant on board of a spacecraft that is being launched into space in order to solve several problems. This includes protecting the spacecraft and clearing near-earth space from dangerous fragments of space debris, energizing the spacecraft’s batteries, and monitoring the atmosphere.

The first function has received a lot of attention in recent years. Debris accumulated in the near-earth space over the entire period of space operation often poses a threat to spacecraft. Now the quantity of space debris is estimated at about 600 thousand fragments. To get them out of orbit, you need to reduce their speed, and pulsed radiation is the best way to do this.

Various installations are being developed for cleaning the near-earth space. For example, in American projects, ground-based lasers are supposed to be used to influence space debris. This method has significant disadvantages associated with the need to pass high-power radiation in the atmosphere, which will lead to loss of optical quality of the beam and the appearance of additional nonlinear effects. Ground-based lasers cannot be used in cloudy weather. They have low mobility, so the number of debris fragments that might be exposed to radiation will be limited. As for the space-based lasers, there are no such disatvantages, the task will consist only of delivering laser fuel components to orbit and refueling the installation.

The second task — remote transmission of energy in order to recharge spacecraft batteries — it is also of great interest. Its solution will extend the battery life from the current 10 years to 20 years and significantly reduce their weight.

Another area of application of the installation is remote monitoring of the environmental situation. It can be used to detect compounds such as ammonia, ethylene, hydrazine, ozone, toluene, trichloroethylene, xylene, arsin, etc. Therefore, the installation can be used to study the gas composition of the atmosphere, as well as to find leaks from gas pipelines. Moreover, as in most location systems, an IRR of radiation is required when monitoring the atmosphere.

What is the current stage of work?

One of the significant achievements in our scientific work was the creation of an optical scheme for a multifunctional laser power plant that provides short pulses in the NHL, with the calculation of all its main components. The development received the patent of the Russian Federation.

Today, this topic is developing, and on the basis of the accumulated scientific materials, a doctorate thesis has been prepared for defense. The results are fully presented in the cycles of scientific papers. A total of 55 publications were published, 24 of them in peer-reviewed and equivalent publications.

Also, in cooperation with the Baltic State Technical University "VOENMEH" named after D. F. Ustinov, negotiations are underway to conduct a full-scale experiment to fine-tune the optical scheme.

The results of this work can be used by enterprises and organizations developing hydrogen fluoride NHL to obtain a pulse-periodic radiation regime. With a slight decrease in the average power, this will make it possible to achieve ultra-high power in the pulse-over 10 W, which is substantially higher than the values achieved in continuous generation mode.

The results will also be important for enterprises of the Federal Space Agency: both to solve the problem of space debris and to recharge the batteries of spacecraft. Finally, our work will help geological exploration companies and organizations of environmental monitoring of the atmosphere that carry out remote monitoring of the environmental situation, search for gas and oil fields by emissions above them, as well as leaks in gas pipelines.