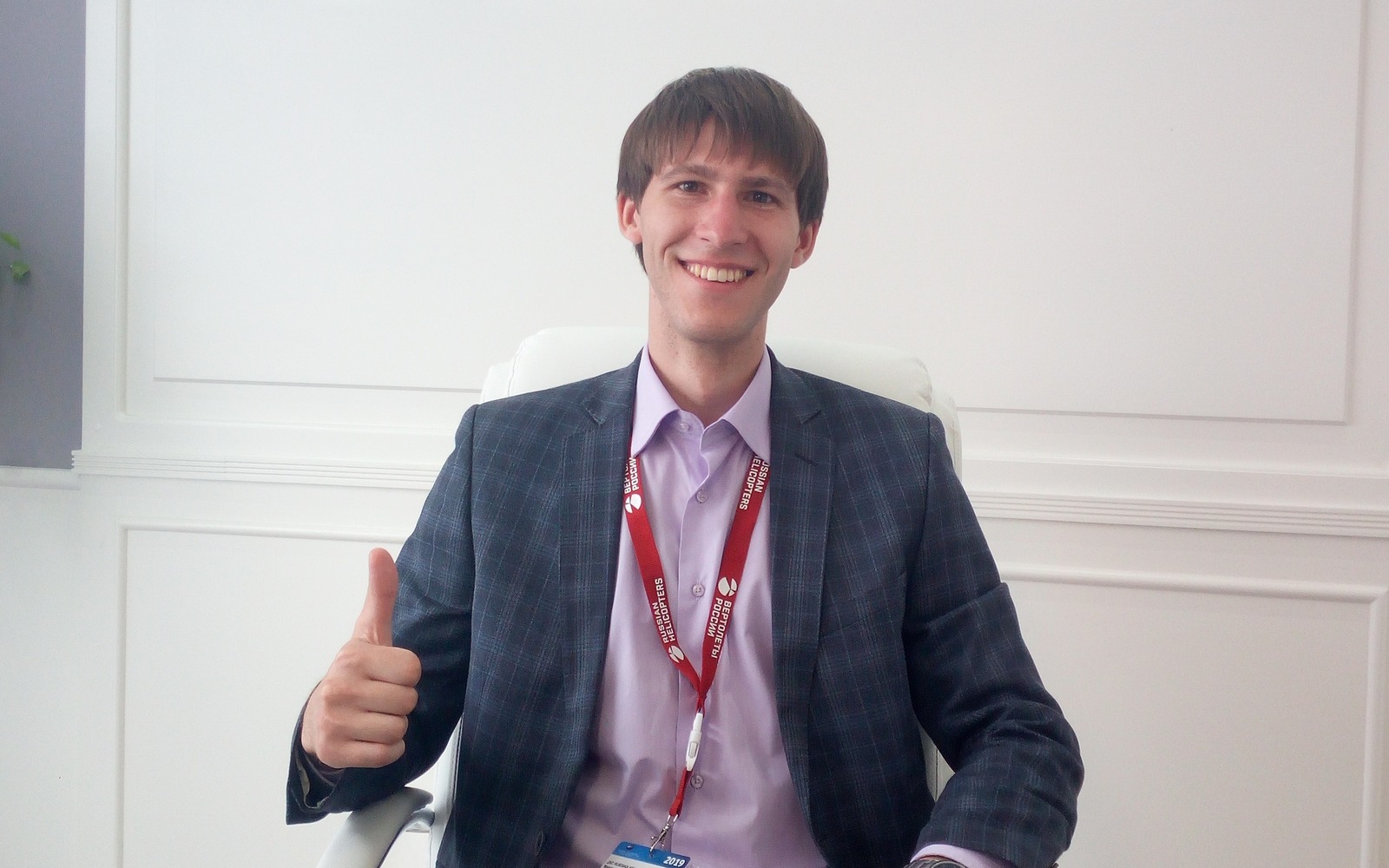 Maxim Kargaev, a postgraduate student of the Department of Helicopter Design at the Moscow Aviation Institute, won a grant of 1.2 million rubles from the Russian Foundation for basic research (RFBR) this summer. The funds will be used for a promising and important project: the young scientist studies the phenomena of wind loading of non-rotating helicopter rotor blades in conditions typical for Arctic latitudes.

In 2018 the research in this area already earned Maxim Kargaev the title of winner of the national award "Golden idea", established by the Federal service for military-technical cooperation of Russia, in the category "Young talents". His work will not only improve the safety of the helicopter operation under harsh conditions, but will also significantly save money on replacing failed sets of blades. According to the scientist, the economic benefit from the project will exceed 2 million dollars per year.

Until recently, the phenomena of wind loading of non-rotating rotor blades were not studied enough. This is due to the fact that most of the helicopter fleet was operated in climate zones with moderate winds, and the resulting cases of damage to the blades were not very noticeable in the general statistics.

"With the beginning of mass operation of helicopters in places with strong winds, including in the Arctic zone with its most severe natural conditions, such damage began to occur more often, — says Maxim Kargaev. — At the same time, the equipment operator suffers significant financial losses associated with premature write-off of damaged blades, as well as forced downtime of helicopters until the purchase and installation of a new set".

Not taking the wind seriously enough can not only have economic consequences, but also threaten people’s lives.

"A relatively recent example of the event when people were in danger due to strong winds is the case of the destruction of the main rotor blades of the Mi-8 helicopter in early 2020, — the scientist continues. — Then, due to the worsening of weather conditions, the helicopter „got stuck“ on the Mutnovsky volcano with a group of tourists, who, fortunately, managed to be evacuated".

Today, it is possible to avoid many common problems associated with damage to the blades when operating helicopters in strong winds. These include the appearance of residual deformations when the blade bends, up to its destruction, the appearance of corrugations on the tail compartments, the blade touching the surface of the runway or tail beam, as well as other elements of the fuselage. These blades, as well as the entire set to which they belong, are mostly removed from use. At the same time, the cost of one set of blades for various helicopters is measured in hundreds of thousands of dollars.

Maxim Kargaev started working on the topic of his research when he was a student. The materials that now form the foundation of his work were included in the special part of his diploma project and were presented to the Commission, which included representatives of the Moscow helicopter plant named after M. L. Mil and MAI. By the decision of the GEC, Maxim was recommended for admission to graduate school.

"At that time, I got the support of my graduate supervisor Yuri Mikhailovich Ignatkin, — he says. — The topic was new and raised many questions. We managed to answer some of them together back then".

Together with Yuri Ignatkin, now his scientific supervisor, Maxim, among other tasks, plans to develop a method for main rotor blades design that ensures their safe operation in the conditions of wind in the Arctic zone.

"The project will also study the dynamic stability of the unmoored and moored helicopter rotor blades when they are loaded with variable wind flow. It is planned to determine the areas of the dynamic instability, critical frequencies and excitation coefficients. In addition, the influence of wind loading on the characteristics of the fatigue strength of the rotor blades will be investigated. It is important to have a method for determining the safe flight life of blades operating in areas with high wind activity" — Maxim notes.

These tasks are formulated and set and will be solved for the first time. The results of the study will make it possible to use domestic helicopters widely for the development of the Arctic zone, as well as in offshore operations — oil and gas production platforms on a number of Russian sea shelves.

As Maxim Kargaev states, the largest Russian companies are interested in the results of the study, including the national center for helicopter construction named after M. L. Mil and N. I. Kamov (JSC NCV Mil and Kamov), which are part of the Russian Helicopters holding.

The chief designer of JSC "NCV Mil and Kamov" Igor Vasiliev notes that the implementation of the proposed research results in design and operation of main rotor blades will increase the competitiveness and attractiveness of our helicopters at domestic markets and worldwide, as well as increase their reliability when operating in places with extreme weather conditions.

"Generally speaking, this study is important for all the enterprises of the holding, including serial plants, — explains Maxim Kargaev. — Of course, this work is beneficial to the operating organizations, such as the UTair group of companies, SKOL Airlines LLC, Abakan Air LLC, Polar airlines LLC, Gazprom Avia air Enterprise LLC, Yamal Aviation transport company JSC, and others. The results will also be used in the interests of the Russian defense Ministry, and that will increase its presence in the Arctic in the coming years."