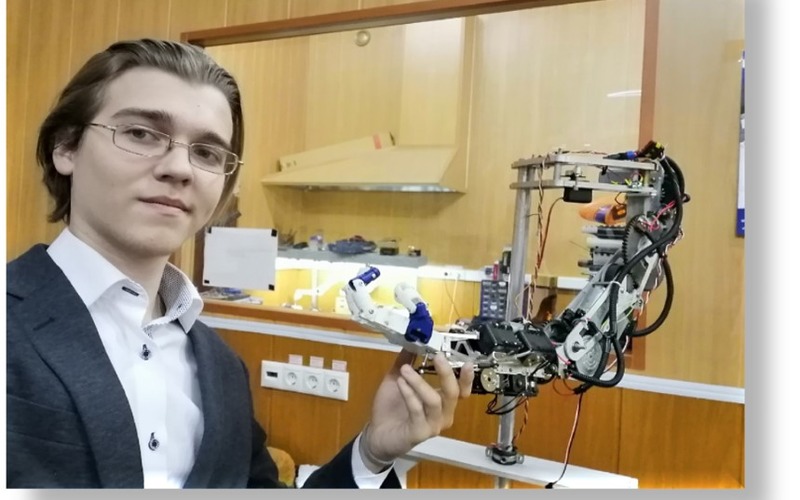 The new bioelectric robotic control system for the hand prosthesis will be three times cheaper than analogues, and will be able to recognize more than nine different gestures and grip.

Oleg Sazonov, a student at the Department of Advanced Materials and Technologies for Aerospace Purpose, MAI School No. 9 "General Engineering Training", develops its own model of the prosthesis for lost or irreversibly damaged body parts.

According to the young scientist, existing mechanical hand prostheses are extremely limited in the functionality of fine motor skills. Many patients  have difficulties in the use of prostheses - they have to learn how to fasten a zipper, tie shoelaces, use cutlery, it is impossible to master playing a musical instrument.

Now Oleg is engaged in the development of a more advanced prosthesis control mechanism than existing ones, capable of sending commands to a mechanical arm, which will significantly expand the functionality of the upper limb prosthesis. Among the tasks that the developer has set for himself is the creation of a prosthesis that allows not to “take off” your hand during sleep, to recharge it or to take a bath, which makes using the wrist more comfortable.

One of the important components of the work of bioelectric prostheses is the processing of physiological signals that control human movements. Currently, the most common signal used in the manufacture of prostheses is the electromyographic EMG signal, which has several limitations.

A MAI student uses a muscle actively developing bioimpedance signal in his development. The basis of the development is the measurement of changes in the impedance (resistance) of muscle tissue by passing an electric current through it and determining the type of capture, depending on the amplitude of the signal. For this, a multitasking and ergonomic device has been developed, which is used as a control system of the prosthesis, based on the method of joint registration of the bioimpedance signal and the EMG signal.

The hardware-software complex that analyzes the muscle signal consists of a non-invasive reader, a device for outputting the signal to the drives of a mechanical arm and a processor that "converts" the signal into motion.

At the moment, Sazonov has calculated the optimal location of electronic assemblies, developed software and a circuit for a control device that analyzes the signal.