MAI Adapted the Shooter Half Life: Alyx to the Needs of Education 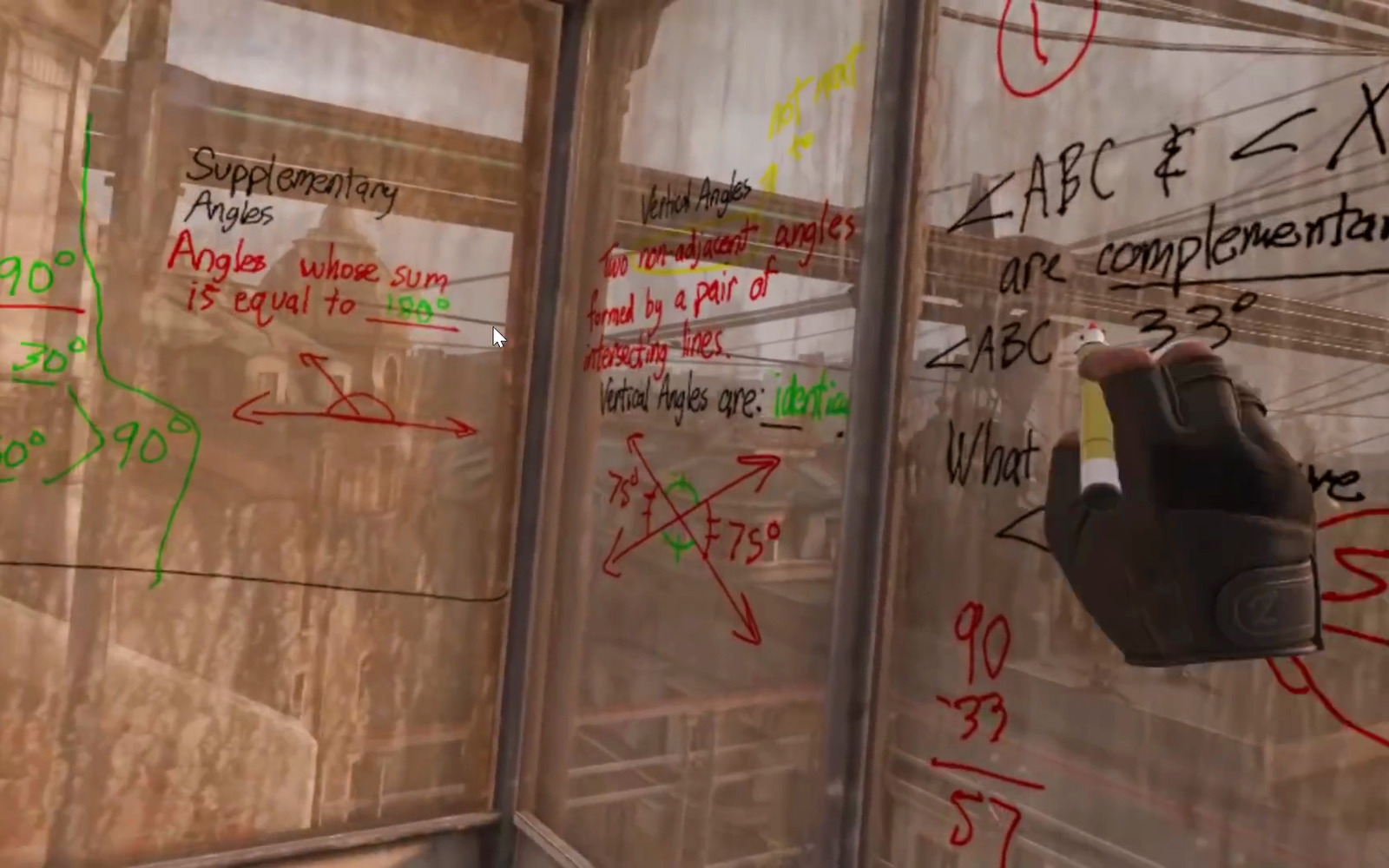 The release of Half Life: Alyx was on March 23, 2020. The new version of the game is developed only for helmets of virtual reality. The event was supposed to be significant for gamers and the game industry, but suddenly it became significant for everyone.

It all started with Charles Cumber, an American school math teacher. He launched the game on release day, but instead of freeing the Earth from the occupation of an alien civilization, he held a VR geometry lesson.

A week later, a trend was picked up by a teacher at Moscow Aviation Institute and part-time research engineer at the Phygitalism technology company Vadim Kondrattsev. He gave a 20-minute lecture on the basics of discrete dynamic sequences to the masters's degree students of the MAI IT Center.

Lecture in Half Life in Russian: How Was It Done?

Phygitalism employees are involved in project development linking XR (virtual, augmented and mixed reality), machine learning and interactive technologies for business. And the company is an official partner of the Moscow Aviation Institute in the educational master's program of the IT Center “Virtual / Augmented Reality and Artificial Intelligence”.

Phygitalism CEO and recent MAI graduate Oleg Yusupov says: "I wanted to understand how a teacher can feel inside such a game. How can such a teaching format (when virtual (VR) and augmented (AR) reality technologies are integrated into the learning process) be generally useful in the future for the development of immersive education?"

The plan was implemented quickly. Vadim Kondrattsev prepared a lecture plan, and then it was easy. The company spent an entire hour recording a 20-minute lecture. To repeat this simple experience can anyone who has a configured PC with full support for VR Ready, a VR helmet, and, of course, the game Half Life: Alyx itself.

Helmet of Virtual Reality: Is It Convenient to Teach in It?

The total teaching experience of Vadim Kondrattsev is seven years. He is an advanced user of XR-technology, which he uses in his lectures for students of Moscow Aviation Institute. But even being so prepared, Kondrattsev remained very impressed with the opportunities that Half Life: Alyx virtual reality gave him.

No discomfort: neither physical nor psychological. He quickly mastered and interacted without restrictions with all objects within the game. It was very convenient to write mathematical problems on virtual glass and use a virtual sponge:

“When you write the first three or four lines, you probably need to get used to it. But after it, you adapt rapidly, your style is almost the same as in life. There is a small technical nuance. It depends on what kind of controller everything is controlled. There are different variations. Some controllers are less responsive to a long retention of the marker, some more. In principle, they hardly differ in price. Therefore, today there is no problem choosing the particular controller that allows you to hold items for a long time so that your hands do not get tired. And everyone’s tracking accuracy is very good.”

Vadim Kondrattsev evaluated his first teaching experience in such an advanced VR environment as successful and quite applicable in practice. Especially now, when, due to the COVID-19 pandemic, everyone is advised to observe a safe mode of self-isolation and stay at home.

Will the Trend Take Root? Probably not.

These lectures have obvious flaws. For example, they cannot last too long. The optimal length is 15–20 minutes. If you record longer, then the beholder will increase the load on the visual and vestibular apparatus. Keeping the focus on a static object (inscriptions on the glass in the case of Half Life: Alyx) in a situation, where the first-person camera is in continuous motion, is exhausting, agrees Vadim Kondrattsev:

“Using the same Half Life, of course, no one will record a full lecture. Still, the game was not created for this. This is primarily necessary to draw attention to the problems, to demonstrate the capabilities and techniques. The game has a lot of distracting details, so it is difficult for the student to concentrate. The site is not adapted for this. There are special platforms for teaching in VR. There are fewer details and it is easier to highlight the object under study. Moreover, in the process of post-processing these videos, the creators try to keep their eyes synchronized so that this does not cause irritation.”

Oleg Yusupov admits: the lecture by Vadim Kondrattsev in Half Life is more about marketing than about education. But they will continue to experiment further. They already have plans:

“We are looking at other immersive platforms. For example, holoportation. There are special 3D-sensors, which, for example, in infrared radiation can scan the space around, and due to this receive a 3D-model of the object. We want to try to implement an experiment when we put a person in front of this sensor in real time — while he is telling something or showing something — and we get his 3D model in real time. With all his movements. Then we will transfer this 3D model to glasses of augmented reality or mixed reality to a person who is located anywhere.”

XR and COVID-19: How Did the Pandemic Draw Attention to Technology?

For most Russian teachers, the phrase “XR technology” still sounds like something obscure and frightening. Of course, in order to skillfully integrate the capabilities of virtual and augmented reality into classes and lectures, you need to have a number of competencies. The acquisition of which may require considerable impact from the teaching staff.

But Vadim Kondrattsev is sure that all these experiments with VR lectures in computer games during a pandemic are a very good reason to look at these technologies and, finally, master them. Moreover, in some universities in Moscow and Russia there are already IT centers which employees can help any teacher with the preparation of such a lecture.

Ultimately, the use of XR-technology, says Vadim Kondrattsev, will allow you to decently save your own time:

“Many complex concepts that should be explained to the students need to be clarified on several levels. This is the level of theory in the form of some kind of theorems, records, equations, text. This is the level of geometric visualizations. The level of direct problem solving. Thanks to XR technology, everything can be combined. And as a teacher, I do not have to spend half an hour of my time drawing a complex object on the board. With these technologies, all you need to do is to download demo models from the library, pull them onto the stage, turn on the animation in 3 seconds. It saves a lot of time and communicate with students much faster and better.”

And in some cases, continues Konadartsev, we can talk not only about saving time, but also about budgetary funds of the educational institution. And VR-helmets, augmented reality glasses and corresponding software are still not an expensive pleasure, he notes:

“Imagine that there is a laboratory that deals with composites. And students are required to learn how to make these composites correctly. This is actually very expensive. And such technologies save money. For what? If this is an offline training, you need to purchase real raw materials for each student and to observe general safety rules. With the help of virtual reality technology, the entire learning process can be repeated in the "virtual". It will be safer and much cheaper. Because the demonstration can be held individually for each and many times.”

Immersive education has its cons. In addition to price, this is also socio-psychological nuances. For example, while no one in the world has a clear understanding of how such technologies will affect a person and his psyche. There are fears that a complete immersion in a virtual environment, albeit for the purpose of education, may not quite right form human values; to deny the opportunity of developing fantasy and imagination himself. Among us there are audiences, visuals and kinesthetics, and not for all categories of people, education in a virtual environment will be equally effective.

However, while there are no plans to fully transfer learning to virtual reality. The integration of XR technologies is good precisely in the effective symbiosis that they create with the traditional training system. And while we all sit at home, we have a unique opportunity to make sure how productive and long-term this alliance can be.