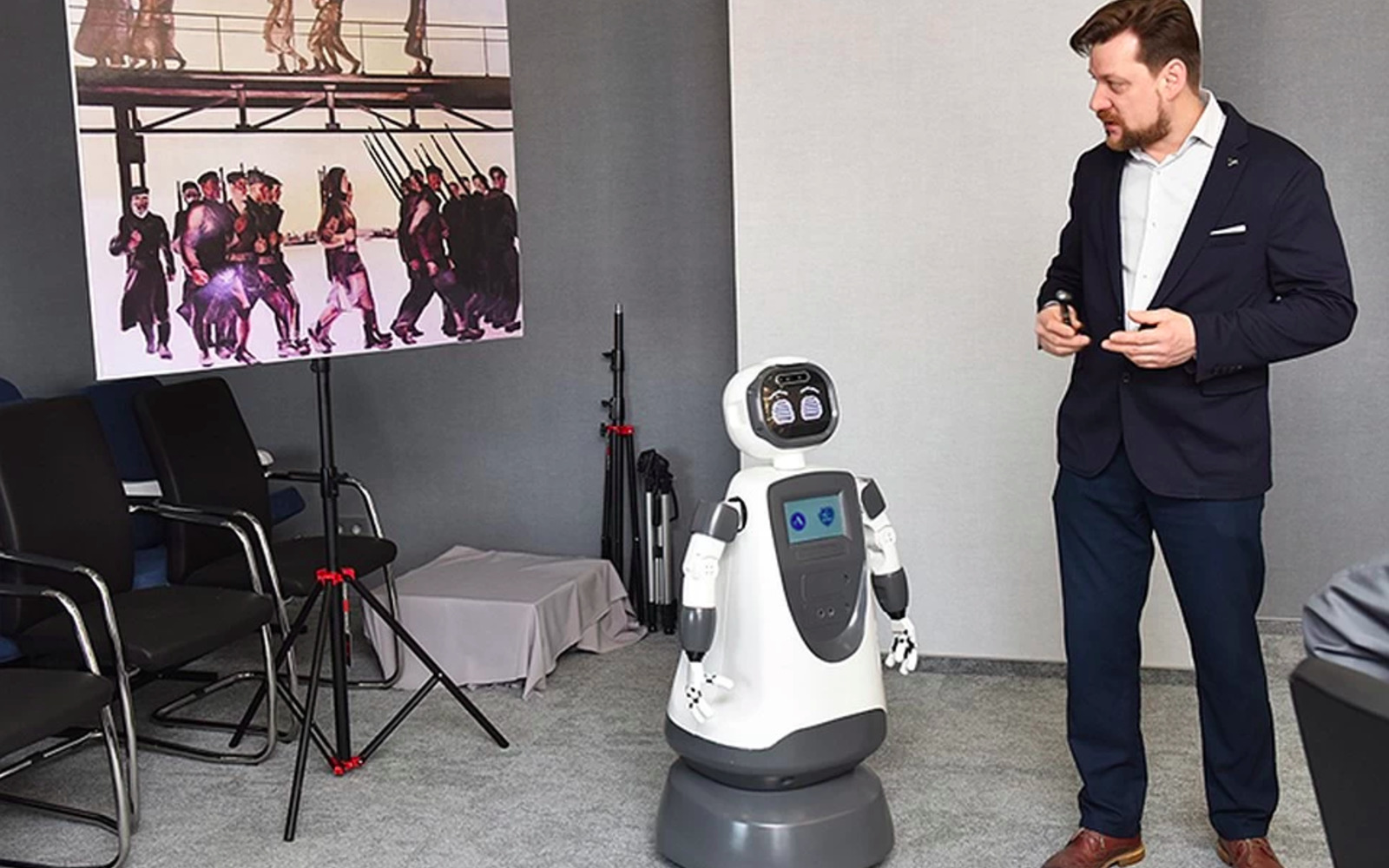 At the Arzamas Instrument-Making Plant named after Plandin, the results of the implementation of a joint project for the development of social robots between Arzamas Design Bureau and Moscow Aviation Institute were summed up.

A meeting of the scientific and technical council began with a demonstration of the capabilities of the robot-guide. “Masha” - this is the name of the robot - registered the members of the council, recognizing the faces of those who were in the database. Then she showed a tour preparation: she told about the painting “Defense of Petrograd”, its composition and artistic elements. Then she answered questions about the weather and described the characteristics of her colleague, the Filya robot.

The developers of social robots from MAI School No. 7 “Robotic and Intelligent Systems” spoke about the creation of individual technologies and modules for their implementation, as well as the supervisor who generally controls the robot.

“The modularity principle allows to create robots of different functionalities, depending on the tasks,” said Nikolay Bodunkov, associate professor at the MAI Department 704 "Information and Сontrol Сomplexes of Aircraft".

"Now we are creating an almost universal base for robots for various purposes. And in the future, it will be possible to quickly complement the system, interchange modules to respond to customer requests".

What can they do?

Both Masha and Filya use technologies for object recognition, speech analysis and synthesis, remote control from anywhere in the world and modularity. At the same time, each has its own characteristics. Filya, which has the function of wireless charging, must adapt communication to each user, keep statistics of responses for the subsequent construction of a deep dialogue, and respond to tactile contact.

Masha’s superpowers are autonomous navigation, coherence of speech, emotional reaction of the “face”, manipulators and a mobile platform, adaptive learning, collaboration - that is, the possibility of joint safe operation of the device with a person.

The navigation system of the robot-guide is now of two types. The first is ultrasonic, for work in one room. Sensors are installed both in the machine itself and around the perimeter of the space. Masha builds a route taking into account stationary and dynamically arising obstacles.

The second type of navigation is for an unfamiliar environment. It involves the use of a stereoscopic 3D camera and technology for online mapping and continuous scanning of changes. This will allow the robot to fix objects on its own, creating a three-dimensional map of the area. In the future, the user will be able to train the robot using the "demonstration and repetition of gestures."

In the constructive plan, the mockup of both robots has already been determined, optimal drives have been selected for the reliability and necessary lifting capacity of the manipulators, electronic elements have been formed, and scalability of models has been ensured.

Both Filya and Masha will become better this year. A guide, for example, will add a little in height so that the user is more comfortable working with him. For both robots, the degrees of freedom of moving systems will be optimized.

"We are conducting a deep analysis of the social robot market. We can say for sure that the topic is trendy,” said Vitaliy Polyanskiy, associate professor of the MAI Department of 701 "Integrated Aircraft Systems".

"There is a demand for exhibition robots and robot-guides. Also, work has begun on branding, corporate identity and the development of certification and safety issues before entering the market. By the end of the year we plan to collect 3-4 new mockups. The 2021 will be devoted to testing in a real environment,” noted Deputy General Designer in the 2nd direction of the Arzamas Design Bureau, Vladimir Pimenov.

Where will Masha and Filya work?

Among the options for Masha “employment” are healthcare institutions. The robot could meet patients, make an appointment, arrange a medical card, answer calls, walk the patient to the office, work with patients with infectious diseases, transport medicines, give them according to the schedule, be an “intermediary robot” with remote interaction between a novice surgeon and an experienced doctor. Filya could visually diagnose a person’s severe condition - acute coronary syndrome or diabetic coma, as well as help people with low vision.

We discussed at the meeting the possibility of implementing individual robot modules, for example, a manipulator arm.

"In the near future, intelligent systems will be at the heart of products for both special and civil purposes. And if we now get the proper preparation, we will successfully cope with this direction in the future,” said Vladimir Evseev, Director General of the Arzamas Design Bureau.