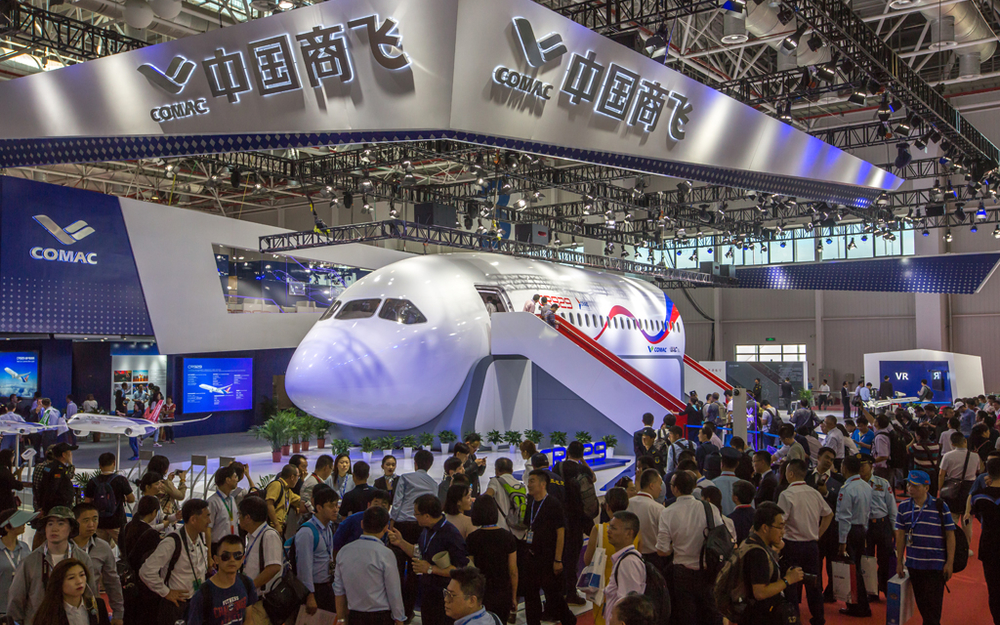 In 2019, one of the main premieres of the International Aviation and Space Salon MAKS -2019 became a full-size mock-up of the CR929 wide-body aircraft. This is a new generation aircraft on which manufacturers in Russia and China are jointly working. Moscow Aviation Institute takes an active part in the project. Students and graduates of the joint MAI and Shanghai Jiao Tong University (SJTU) educational programs are involved in the creation of the CR929 long-range aircraft.

The CR929 project is considered the most high-tech in the portfolio of joint projects of the two states. According to officials, the development process of the first Russian-Chinese aircraft is going according to plan at the moment. In general, it is expected that first deliveries may begin in 2025–2027. We will tell you here about the creation and prospects of the Russian-Chinese CR929.

There was a lot of talk about the Chinese-Russian plane in 2008. The very agreement on cooperation between the two countries was signed in 2014 during the visit of Vladimir Putin to Beijing. The development of the wide-body long-range aircraft was undertaken by the Russian United Aircraft Corporation (UAC) and the Commercial Aircraft Corporation of China (COMAC). In 2017, China-Russia Commercial Aircraft International Corporation (CRAIC) was established in Shanghai, which became a new project operator.

In the same year, the project received its official name - CR929. The letter C stands for China, and R stands for Russia. The number 929 also has a certain meaning - the number 9 in the Chinese tradition means eternity and longevity.

In June 2018, UAC and COMAC agreed on the general appearance of the new wide-body aircraft. In November of that year, the CR929 for the first time appeared in public as a full-scale mockup at the China Airshow in Zhuhai. In Russia, the aircraft was first presented at MAKS-2019. Especially for the Moscow air show, a full-scale mockup of the plane's section 22 meters long, 5.9 meters wide and 6.5 meters high was mounted. For its demonstration, a separate pavilion was built, which became one of the most visible at the air show. In particular, on the first day of the opening, it was visited by the Russian President Vladimir Putin and Turkish President Recep Tayyip Erdogan. 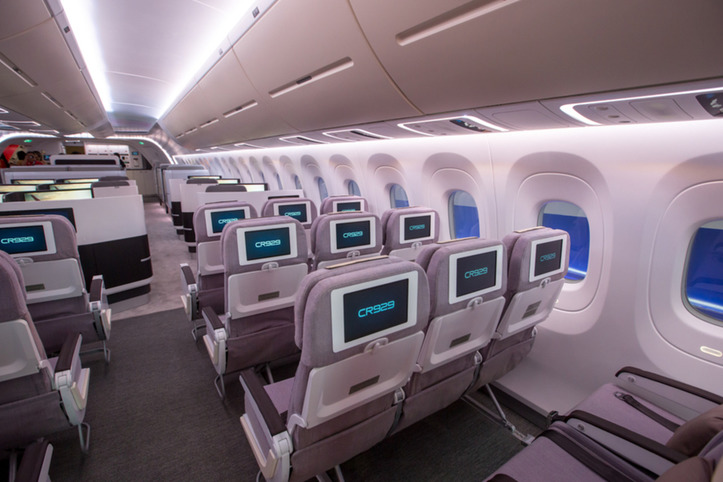 At the air show in China, as well as at the Russian MAKS, the mockup of the CR929-600 basic version was shown. In the future, potential customers will be offered the CR929 family of three configurations: in addition to the basic version, with extended (CR929-700) and shortened fuselage (CR929-500).

The basic version of the aircraft itself will receive three different modifications: for 281 passengers in a three-class version, for 291 people in a two-class mockup and for 405 in a single-class version. A more “packed” version of the mockup for 440 people for short flights is also planned. Design will be carried out on specific orders of airlines. 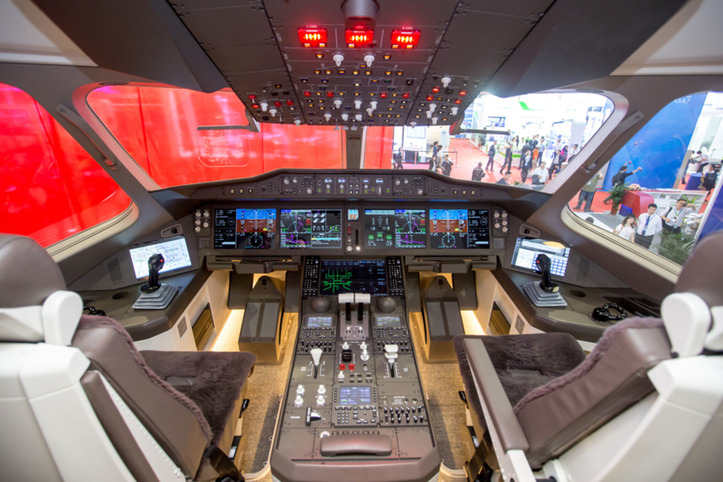 On the Way to Gate 3

Work on the new machine is divided geographically: a centre-section and wing with mechanization are being developed iin Russia, and the body and fin in China. Also, Russian engineers will be responsible for avionics and the operation of control systems. As part of the project, it was decided to create an engineering center in Russia.

Hundreds of specialists will join the creation of the aircraft - not only UAC, but also other Rostec organizations, for example, the United Engine Corporation (UEC) and the Technodinamika holding. But such a large international project as the CR929 aircraft requires new personnel with special training. Universities in Russia and China are already engaged in the training of engineers who will take part in the creation of a promising aircraft. The first group of engineers recently defended their theses. The joint master's degree program of Moscow Aviation Institute (MAI) and Shanghai Jiao Tong University (SJTU), founded in 2017, was completed by 29 Russian and 23 Chinese students. In the future, they will be able to continue working in the engineering center under the CR929 program in Russia and in its branch in China.

To date, the development process of CR929, according to officials, is going accordant with a plan. A preliminary study is being completed and the main suppliers of on-board systems are being determined. At the previous Gate 2 point, which the developers successfully passed at the end of 2017,they defended the technical concept and philosophy of the future machine.

One of the issues to be solved is the choice of engines. To date, ready-made options from GE and Rolls-Royce are considered. At the same time, the Russian PD-35 with a thrust of about 35 tons will become an alternative for the future, but it has to wait.

“The PD-35 program involves the creation of a higher thrust engine with a deadline for the completion of development work in 2027. The engine is being created to offer it for the CR929 wide-body long-range aircraft. We are at the stage of negotiations with the Chinese side on the configuration of this program. Much will depend on the work on the plane,” said Yury Shmotin, UEC Deputy General Director and General Designer, in an interview to RIA Novosti in September 2019.

In addition to choosing a power plant, engineers need to determine the materials for the design and work out the nuances of aerodynamics. At the end of last year, the next stage of tests in wind tunnels was completed in Moscow. The control model, made at a scale of 1:39 in the configuration of the fuselage plus wing, was purged at TsAGI for a week, with the participation of specialists from the UAC and COMAC. 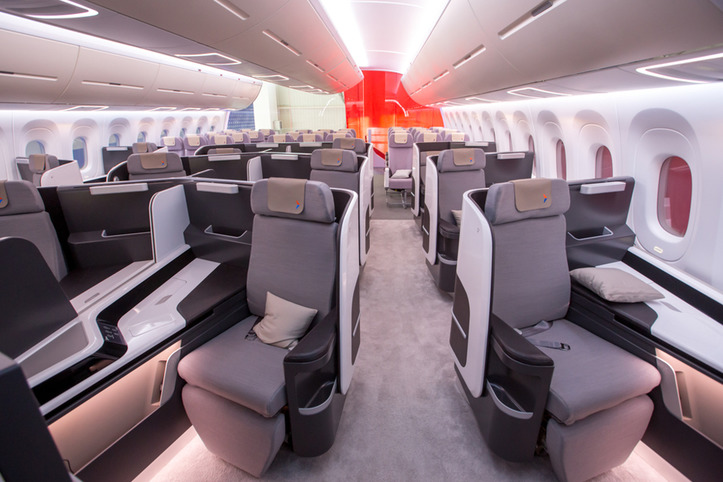 In expert circles, there are high expectations for the Russian-Chinese aviation project. It is believed that the new aircraft can compete with two giants - Airbus and Boeing - in the Chinese market and the Asia-Pacific region. It is assumed that the main customers will be the Chinese companies Air China, China Eastern and China Southern.

Many industry experts note the fact that the CR929 is still in the role of catching up. A new generation of models has already entered the market - the Airbus A350 and Boeing 787. However, this situation has its advantages. The creators of CR929 need to offer new solutions, to provide an advantage over existing machines. At the same time, developers are already well aware of the shortcomings of competitors.

For example, the Airbus A350 turned out to be very large, and the designers had to limit the wing aspect ratio in order to match the aircraft with the ICAO category dimensions for aircraft of this class, experts say. The Boeing 787 is considered a pioneer in aircraft manufacturing of this dimension using composite materials. But the American aircraft also limited the length of the wing. It is assumed that the CR929 will find the way around these issues, since the aircraft will be carried out conservative to the ICAO restriction. At the same time, composites will be widely used in the creation of the Russian-Chinese aircraft - they will make up more than 50% of the airframe design.

New technological solutions in aerodynamics are expected. The CR929 will differ by a large elongation using sharklet tips. This will minimize air resistance and optimize fuel consumption compared to competing machines. Carriers will be able to get significant economic benefits, and passengers - improved comfort. The spacious CR929 interior promises to be one of the best in its class, especially in height. The specific details and nuances of the interior have yet to be determined during development, nevertheless, some possible innovative solutions could already be seen by visitors to the model of the aircraft at MAKS. For example, the portholes in CR929 are planned to be made without mechanical curtain - a simple press of a button and the window loses its transparency.

When can all this be seen “in the material”?

“The years 2023–2025 is the term that we have designated in our master plan as the term for the first departure with passing tests within two to three years. While we are on schedule, respectively, with deliveries from 2025 to 2027,” said General Director of UAC, Yury Slyusar last summer on the Russia-24 television channel.

In general, it is expected that the aircraft will enter the market in the second half of the decade, and the potential supply will be about 1,000 aircraft in 25 years.