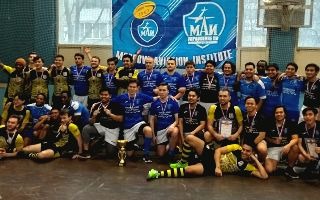 On December 8, a traditional tournament "MAI Touch Rugby Cup" was held at the university. This time the tournament was dedicated to the 90th anniversary of MAI. 7 rugby teams of Moscow universities took part in the competition.

The third place was taken by the RUDN team, which beat the Financial University. The MAI team of African and Latin American students took 5th place, beating the players from Moscow State University with a score 5-0. 7th place went to Timiryazev Academy team.

We congratulate the winners and thank those who participated in the rugby tournament!