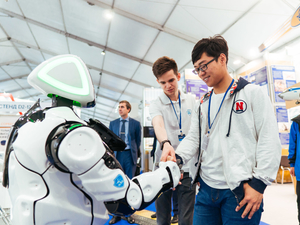 To make the most of these global trends, a partnership of large companies with the state should occur to promote science and technology in pursuit of integrating AI-related technologies into various spheres of the Russian economy. A second crucial element was the creation of the Digital Economy national program —a federal project, fully financed from the state budget, that would be specifically concerned with the practical implementation of a broad spectrum of initiatives concerned with AI and related fields.

The most distinctive feature of these orders was premised on active involvement of large Russian corporations, including Gazprom Neft, Sberbank, Rosatom, Rostekh, Rostelekom, and Russian Railways—essentially making these entities responsible/accountable for the whole process of implementation.

Russia must be able to create attractive conditions for both domestic and foreign (via economic stimuli and simplified legal procedures) top-notch experts in the domain of machine intelligence. And prior to this, during his February address to the Federation Council (the upper chamber of the Russian parliament), Vladimir Putin stated that, by the end of 2021, “all schools in Russia must receive access to high-speed Internet,” which will upgrade the level of cyber literacy among young Russians, thereby creating fertile soil for expanding the pool of potential AI/IT specialists . A similar (but methodologically much more advanced) strategy is to be implemented at Russian tertiary institutions, including Moscow Aviation Institute. Namely, starting from 2021, some Russian universities will embark on implementing AI in a broad range of spheres. According to Russian officials, the initiative might be supported by more than 100 Russian degree-granting institutions.