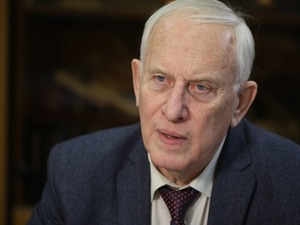 On November 15, the Russian Academy of Sciences (RAS) summed up the election results and published a list of academicians and corresponding members. Professor Oleg Mikhailovich Alifanov, Head of the Department 601 "Space Systems and Rocket Science" of Moscow Aviation University, Doctor of Technical Sciences, was elected as an academician of the RAS.

Professor Oleg Alifanov is a specialist in the field of design theory, thermal management and thermal protection of aircraft. Among the main results of his scientific activity is the discovery of an actual scientific direction “Theory and Methodology of Inverse Problems as the Basis of a New Approach to Thermal Design and Thermal Management of Technical Systems”; development of the theory and methods for solving incorrectly posed inverse problems of heat and mass transfer, which are used in the research by many domestic and foreign scientists. On this theoretical basis, original experimental installations and test benches were created to study and test the thermal conditions of structures, new principles of non-destructive diagnostics and methods of aerothermodynamic tests were implemented, and numerous studies were carried out by industrial enterprises.

Under the authorship of Mr. Alifanov, more than 480 scientific papers were published, of which 13 monographs and 48 copyright certificates and patents. He is the editor-in-chief of the MAI Vestnik and Thermal Processes in Engineering magazines, a member of the editorial boards of several international scientific journals included in the Web of Science and Scopus databases, and the chairman of the Expert Council for Aviation and Rocket and Space Technology of the Higher Attestation Commission under the Ministry of Science and Higher Education of the Russian Federation, a member of the Council of the Russian Academy of Space, the Presidium of the Scientific and Technical Council of Roscosmos.

We congratulate Oleg Mikhailovich on his election to the academicians of the RAS and wish him new scientific victories!