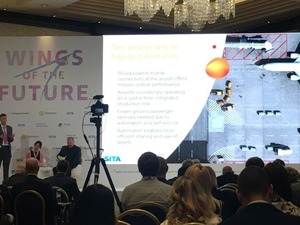 On October 30-31, the 17th International Aviation Forum “Wings of the Future - 2019” was held in Moscow. The event was attended by a delegation of students from Moscow Aviation Institute.

The most interesting topics of the reports were the development of narrow-body crossovers, the abandonment of A220 series aircraft and the modernization of airports in the next 10 years. Experts also highlighted the equally important problems of the development and application of new technologies in the field of aircraft manufacturing, the transition to digital transformation, and the rejection of paper documentation process. Solutions will reduce costs, improve the environmental situation and completely switch to biometrics. Consumers will have the opportunity to significantly save time, including safety-related matters.

It should be noted that the conference is one of the leading forums on the problems of civil aviation: the future of aircraft manufacturing and tourism, the transformation of airlines in the modern world, and innovation in aviation. It brings together civil aviation managers who already make decisions that determine the future of the industry. The event was attended by over 670 people: industry representatives from 20 countries of such regions as America, Asia, the Middle East, Europe and the CIS countries.

According to the report of Vadim Fokin “Narrow-Body Crossover: Specific Solutions in the Ever-Changing World”, the most urgent tasks of the aircraft fleet are the ability to open new routes, track growth, increase the carrying capacity, and choose the optimal configuration for specific flights. When considering air travel within Europe, the opening of new routes is the main purpose of using narrow-body crossovers. This is due to the fact that they are much more compact, lighter and more mobile than other aircraft models used for these purposes.

In Russia, narrow-body crossovers have just started their development. Currently, their main task is natural growth, and by opening new routes they lose to the large narrow-bodied ones. But today it is safe to say that narrow-body crossovers are the future of domestic aviation. The reasons for this lie, first of all, in meaningful expansion of the air transportation market and the growing tendency to use airplanes of such capacity. According to statistics, approximately 75% of flights are carried out with less than 150 passengers on board.

The current situation is such that the E2 family is the best complementary solution and the only new generation platform that is able to fully satisfy the needs of today and tomorrow.

In addition, the E2 family in comparison with the A220 family is cheaper to maintain and is equipped with electric motors. This makes it the best business-oriented solution for the segment both from the point of view of airlines and passengers interested in reducing the cost of flights and in the environmental friendliness of air transport. That is why in the near future it is planned to withdraw A220 from production, completely replacing them with E2.

But not only planes are becoming more technologically advanced, airports are also adapting to changing realities. In his report, Benoit Verbaere, SITA Business Director, described in detail the further updating of airports in accordance with the new requirements and expectations of modern consumers. Three main points are below:

A delegation of MAI students visited the event at the initiative of the MAI administration, under the leadership of the Assistant Vice-rector for scientific affairs, Leonid Petrovich Ponyaev.