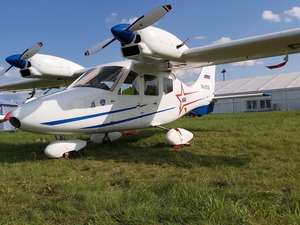 Recall that MAI-411, developed jointly with the Design Bureau of Moscow Aviation Institute and built on the basis of the Kizlyar enterprise KEMZ, first presented in the air at the International Aviation and Space Salon MAKS-2019.

“In Kizlyar, we are creating an airline company that will deal with such flights (on light aircraft - TASS remark). We are preparing documents, we will train people there, involve youth in this area. It will be the air company, in which our aircraft will be located,” said Ibrahim Akhmatov, Director General of KEMZ Concern, adding that it is planned to complete the creation of the air company in mid-2020.

According to him, the fleet of the new airline, in addition to light-engine aircraft, will include helicopters, as well as motor hang gliders.

“We plan that the airline will have two MAI-411 aircraft and two helicopters, which we expect to purchase. They will be used for tourism, for the Ministry of Emergencies and air medical service. We’ll transfer (to the ownership of the airline) our motor hang gliders, which the plant made in Soviet times,” explained the Director General of KEMZ Concern.

Runway in the Mountains of Dagestan

For the development of light motor aviation, a runway will be built in the Shamil district of Dagestan.

“We are building a flight strip in the Shamil region, in the mountains, at an altitude of 2200 m. We will use our planes to deliver tourists there who want, for example, to ski. It takes five hours to get from Kizlyar to the Shamil district, and our plane will fly 45 minutes,” Akhmatov said.

According to him, the runway length is 600 m. According to the take-off and landing characteristics of the MAI-411, 200 m is enough, but in the mountains it is necessary more: because of the rarefied air, the landing speed is different. He also added that KEMZ has already restored a 1,500-meter runway at the Kizlyar airfield.

“Previously, almost every district center of the republic had airfields. Now the government of the republic is considering the development of a concept (development of light aviation), we have already submitted our project, we will work together on this,” said Director General of the enterprise.

It is worth noting that the company internally intends to repair and improve the territory of the old terminal in Kizlyar, which will be used by passengers of the new airline.