Why Do Young People from Africa Choose to Study at MAI? 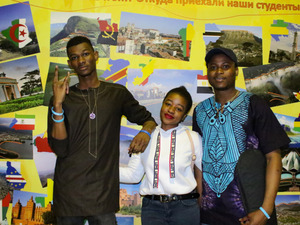 Among the leading countries for recruiting for the 2019/2020 academic year, there are South Africa (13 applicants), Algeria (8 applicants) and Zimbabwe (7 applicants).

“I always liked engineering, because it involves the creation and design of various devices. I immediately decided to enter “Propulsion Engineering” program, because it is an important part of aircraft, without an engine the plane will not be able to take off. Once I dream of creating a unique engine of the future. I decided to study at Moscow Aviation Institute, because I believe that this is the best university in Russia to study aerospace sciences,” said Samuel Isaiah Bulus, a freshman student from Nigeria.

Since a fairly large number of students from African countries study at Moscow Aviation Institute, they are actively involved in the student life. They become volunteers, participate in sports and creative events. So, in 2019, students took the initiative to organize a traditional holiday - Africa Day, which is celebrated in many countries of the African continent. The university supported this initiative, the celebration took place on May 24. Students performed with creative numbers and talked about their home countries. The event is planned to be made traditional.

“Africa is an important region for us, it is interesting and promising for the development of the university’s international activity,” commented Alexey Zarechenskiy, Deputy Head of MAI International Department. - “Potential students can enter Moscow Aviation Institute both directly and through scholarship programs of Rossotrudnichestvo or partners.”

Recall that from October 23 to 24, Sochi hosts the Russia-Africa Economic Forum on international cooperation between Russia and African states. In the framework of the forum there was a discussion panel “Russia - Africa: Science, Education and Innovations for Economic Development”.

“We expect further expansion of diverse humanitarian cooperation between Russia and Africa, primarily in the field of higher education and scientific research. Opportunities and ways to increase the number of students from African countries in Russian universities are being worked out in the coming years,” said Mikhail Kotyukov, Minister of Science and Higher Education of the Russian Federation, during his speech at the forum.