Drone Racing Cup of the Institute No. 2 Was Held in MAI 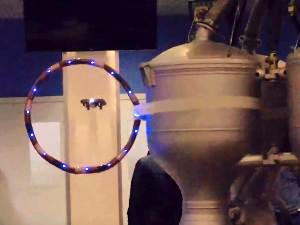 In the current academic year, Institute No. 2 “Aircraft, Rocket Engines and Power Plants” celebrates 90 years old. On October 11, the first festive event dedicated to the anniversary, Cup of the Institute No. 2 in drone racing in the Tiny Whoop class among university students, was held in the lobby of MAI Building 2B.

For the participants, a luminous track made of air gates and real aircraft and rocket engines was prepared: overbanks, head-on courses and a flight in the propulsive nozzle - these were just part of the tests that pilots should pass. Viewers could watch the drone flights not only from the side, but also from first person view on the big screen.

In total there were 5 qualification flights, which were full of dramatic competitive moments. In the first flight after a strong collision, the drone of Georgiy Kalagov failed, however, being prepared for technical difficulties, it was able to return to the competition after a couple of qualifications. Georgiy showed a good level of piloting, but the gap was already too significant.

According to the results of 5 qualification flights, 4 pilots entered the semifinals: Sergey Seliverstov (24 laps), Alexander Galamich (11 laps), Nikita Ovsyannikov (11 laps) and Matvey Tsivinyuk (9 laps). Here the competition was held according to the Olympic system: on the speed of three laps of the same track.

According to the results of the competition, gold, silver and bronze received MAI students:

All pilots received souvenirs from the MAI Directorate of Institute No. 2, and the competition leaders were awarded with diplomas and valuable prizes.