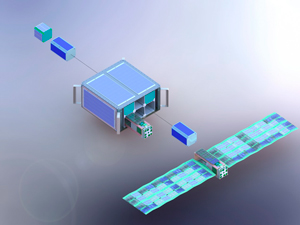 A report on the cycle of planned experiments was presented by Institute No. 6 “Aerospace” of Moscow Aviation Institute at the 54th Scientific Readings in memory of Konstantin Tsiolkovsky in Kaluga in September this year.

It is planned that within the framework of the “Inspector - Small Spacecraft” experiment, MAI students will deploy in orbit near the International Space Station (ISS) a constellation of small satellites intended for the inspection of low-orbit space objects. The creation of an orbital constellation consisting of a basic small spacecraft and satellite inspectors separating from it will ensure the safety of the ISS flight: each satellite will be equipped with an optical search, identification and rendezvous system.

Yury Yegorov, Alexey Kurguzov, and Alexander Chernyshov, employees of MAI Institute No. 6 “Aerospace”, made a report on the group flight of small spacecraft during the space experiment “Inspector-Small Spacecraft”. The MAI report presented the main aspects of the space experiment project implemented with the help of the ISS Russian segment for testing technologies for remote inspection of space objects in near-Earth orbit by automatic means of the spacecraft constellation during their joint orbital flight.

The experiment consists in a visual study of the ISS and the basic of small spacraft using the orbital swarm of spacecraft inspectors, as well as in the development of technology for maneuvering of small spacecraft that can track other space objects and study them. In the MAI experiment, two basic small spacecraft platforms will be involved, based on the designs previously created at MAI.

It is planned that the experiment will take place in four stages, from 2021 to 2024. MAI experience in creating various small spacecraft allows us to look with optimism at the possibility of achieving our goals. So, for example, in July 2017, the university launched the Iskra-MAI-85 satellite, the chief designer of which was Alexander Chernyshev, who takes part in the “Inspector - Small Spacecraft” project.