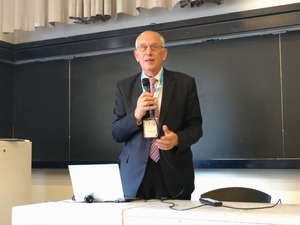 On September 9-12, the XXV International Congress of the Italian Association of Aeronautics and Astronautics (AIDAA) 2019 was held in Rome, Italy, in which the specialist in the theory of design and spacecraft thermal protection Oleg Mikhailovich Alifanov took part. Mr. Alifanov is a Corresponding Member of the Russian Academy of Sciences, Doctor of Technical Sciences and Professor of MAI Institute No. 6 “Aerospace”.

The 2019 AIDAA Congress is held every two-three years and is organized by the Italian Association of Aeronautics and Astronautics, founded in 1920. This year, the congress was held by the Faculty of Civil and Industrial Engineering at Sapienza University of Rome, with which Moscow Aviation Institute has been cooperating for more than 10 years. “We are conducting joint research in the field of modern heat-shielding materials for spacecraft,” Professor Alifanov explains.

The aim of the AIDAA Congress was to bring together the international community of scientists and specialists in the aerospace industry to discuss the latest achievements in the field of science and technology. Congress participants were representatives of the aerospace community of Italy and the world.

Along with Stanford University professor Brian Joseph Cantwell, Oleg Alifanov opened scientific meetings of the congress and in the first plenary session held a report on the topic “Identification and Verification of Mathematical Models in the Design and Testing of Spacecraft”.

In his report, Oleg Mikhailovich highlighted important stages in the development of research on the thermal protection of spacecraft: from the birth of this field of science in the 60s of the 20th century in the USSR and the foundation of a school for the study of the aircraft thermal protection in MAI to international modern research. Oleg Mikhailovich noted the importance of research that is being carried out at the Moscow Aviation Institute on the theory and methodology of inverse problems to design and verify reliable mathematical models throughout the life cycle of creating spacecraft. He also gave best regards from MAI Rector Mikhail Pogosyan to the congress participants.

The results of the conference were the expansion of MAI scientific relations, an in-depth acquaintance with the level of Italian aerospace research and a proposal from the Sapienza University of Rome on the further development of scientific cooperation between two universities, as well as at the level of developing joint curriculum and student exchange.