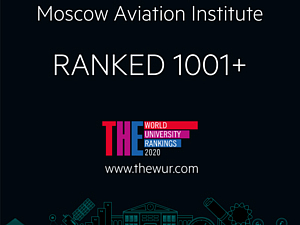 Times Higher Education (THE) is the leading provider of higher education data for the world's research-led institutions. It’s World University Rankings is one of the three most respected industry ranking products.

Times Higher Education evaluates universities by 13 indicators, divided into 5 categories: the quality of education, the strength of a scientific school, citation of publications, international integration and cooperation with industry. The latter became a MAI trademark in the ranking: in this category the university took the 186th place among all universities in the world. This was made possible by the implementation of comprehensive scientific and educational projects with key players in the Russian high-tech market, as well as the development of international relations.