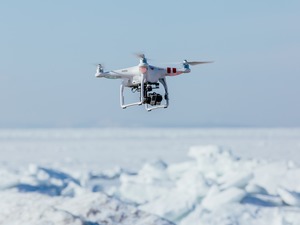 Representatives of Moscow Aviation Institute (National Research University) took part in an Arctic expedition, during which research on the surface of the Svalbard archipelago glaciers using unmanned aerial vehicles were done.

The studies were undertaken near the village of Barentsburg on the Espark glacier (Isfjord Bay), which is characterized by a “classical” zone of cracks in the zone of contact with the waters of the bay (Emer Bay). Observations in the marginal zone of glaciers were associated with a risk to people, therefore, the study of this part of the glacier was carried out using unmanned aerial vehicles.

The experience of using UAVs in the Arctic expedition to Svalbard, in the 64th Russian Antarctic expedition and on the scientific and expeditionary vessel Akademik Tryoshnikov can help solve methodological and technical issues about observations in hard-to-reach areas of glaciers. The use of modern technical means allows to obtain unique information about the reflective and thermal characteristics of the surface of glaciers, where standard observations are not possible due to the complexity of the landscape or the risk to people.