MAI and TsAGI Work on Creating an Advanced Spacecraft Engine 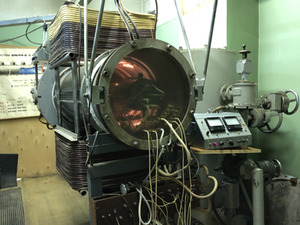 Representatives of the Moscow Aviation Institute (National Research University) took part in a meeting on the development of straight-flow air electric propulsion engines, which was held at the Central Aerohydrodynamic Institute named after Professor N. E. Zhukovsky (TsAGI). The honorary guest of the event was the academician of the Russian Academy of Sciences (RAS), professor of the Moscow Aviation Institute, Harry Popov.

The meeting discussed the further continuation of joint research, modernization of the experimental base and financing. In his report, Head of the TsAGI aerospace research program Alexander Filatiev spoke about the institute's projects in space technology, the direction of work and the capabilities of experimental facilities. The features of thermal vacuum, acoustic research, testing of models and full-scale models of rocket and space technology were admitted.

To run heat-resistant vacuum tests, TsAGI has specialized facilities with a wide range of functional capabilities that can be upgraded to industry standards in the shortest possible time. Among them, one can distinguish a 26-meter installation with a diameter of 4.3 m, equipped with a deep vacuum system, a 30-meter heat-resistant vacuum chamber TPVK-1 (diameter 13.5 m), BAT-102 (diameter 3.2 m), and ionospheric aerodynamic IAT-2 pipe (diameter 1.4 m), which have unique characteristics and do not have domestic analogues.

Mr.Filatiev also presented important results of some comprehensive studies in the fields of design, aerothermodynamics, electrodynamics, flight dynamics, and control systems. Particular attention in the report was paid to activities in the field of the development of ramjet electric propulsion engines for spacecraft that could fly in ultra-low orbits with an altitude of 150-200 km.

At the end of the meeting, the participants expressed mutual interest in the implementation of joint developments and promising aerospace projects. Recall that the joint research of TsAGI and MAI scientists in the field of development of promising electric propulsion engines was launched in 2014 as part of the TsAGI-RAS Basic Research Program.