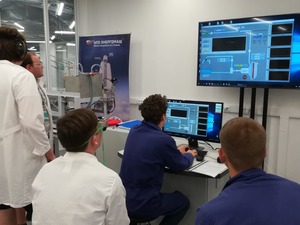 At the Moscow Aviation Institute (National Research University), methods and tools were developed for connecting engine sensors with a diagnostic system at the Research and Development Complex - 751 (NIK-751) stands for JSC NPO Energomash (branch of Roscosmos State Corporation). This system in real time analyzes the engine condition according to the measured parameters and, based on the results obtained, forms a decision on those or other features of the engine’s functioning directly during the test.

Data quality is of primary importance to the functional diagnostics system for liquid rocket engines. The depth of diagnosis and, as a consequence, the effectiveness of solving the tasks depend on the error of the measuring instruments, the application conditions or the location of the sensors. To ensure the accuracy of the analysis of diagnostic signs, special algorithms have been developed that localize the occurring malfunction within the duct, accessory or engine structural element.

“Essentially, this is a step forward in comparison with the emergency protection system that is used in the enterprise during fire tests of liquid-propellant rocket engines. With an increase in the productivity of computer technology, it became possible to significantly increase the amount of information received and processed on the engine condition: not by several continuously changing measured parameters used in the emergency protection system, but by dozens of directly and indirectly measured parameters,” - said Head of Thermogasdynamics, Heat Exchange and Hydraulics Department of NPO Energomash, Doctor of Technical Sciences, Professor David Martirosov.

The system of functional diagnostics of a liquid-propellant rocket engine, based on a mathematical model, allows us to describe the relationship of parameters that reflect the current engine condition. New diagnostic methods and tools take into account design features and engine characteristics, which provides an advantage over the emergency protection system. NPO Energomash plans to put the system of functional diagnostics of liquid rocket engines into commercial operation in March 2020.