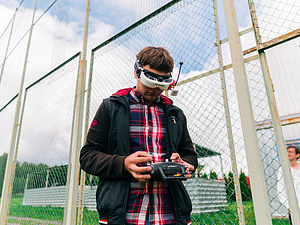 On August 24-25, the largest drone festival in Russia, the Rostec Drone Festival, will be held in Gorky Park in Moscow. One of the organizers of the event will be the Drone School of Moscow Aviation Institute. The event is supported by the Rostec State Corporation, Technodinamika holding company and All-Russian Physical Culture and Sports Society “Labor Reserves”.

The festival’s ambassador will be a young aircraft designer Sergey Gorobets, a second-year student of Moscow Aviation Institute, specializing in aircraft engineering.

The Ambassador acts as an opinion leader at the event, helping to increase brand awareness. “I wanted to attract one of MAI students to this important work, and Sergey is a worthy media figure, and for him the topic of flights is very close,” - said Kirill Schukin, founder of MAI Drone School.

Earlier, Sergey had already made a successful presentation of his invention (modernization of the MC-21 aircraft with alternative fuel engines) in an open lesson with the President of Russia, took part in WorldSkills for professional skills in aircraft manufacturing, and also developed the idea of creating an innovative drone for the Kaliningrad Ministry of Emergencies.

To pilot a racing drone is a very complex and quite dangerous process. The aircraft is capable of speeds from 0 to 200 km / h in less than 2 seconds. A total of 32 pilots will compete. Russia will be represented by 16 of the best domestic racers, which will be determined by preliminary selection: about 500 people have already taken part in the tests, and among them there are graduates of MAI Drone School. The last qualifying stage will be held on August 17.

The remaining 16 participants are invited masters from the stars of the world drone racing.

“Since we are in contact with all foreign organizations and usually compete with them, we know the pilots whose names are in top of the world ranking. And we selected really super cool pilots. The spectacle will be exciting,” - said Kirill Schukin.