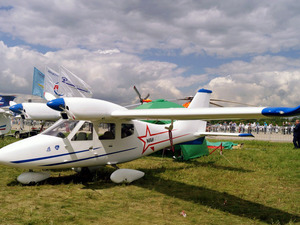 “The new MAI-411 light multi-purpose four-seat aircraft developed by the Industry Special Design Bureau for Experimental Aircraft Engineering of MAI is planned to be demonstrated in the flight program of the International Aviation and Space Salon MAKS-2019,” - Vadim Dyomin, chief designer of the MAI design bureau, told to Russian information and analytical agency AviaPort.

MAI-411 was created on the basis of the MAI-407 light multipurpose four-seater aircraft taking into account the requirements of the AP-23 aviation regulations. The chief designer of the MAI design bureau specified that the units of the first prototype were built at the site of MAI, and its final assembly, testing and customization were performed at the OJSC Kizlyar Electromechanical Plant (KEMZ) in Dagestan.

All components of the aircraft are Russian-made, with the exception of the engine, which is produced in Austria, but they also plan to replace it with domestic ones. At the first stage, MAI will take part in the technological preparation of the mass production of the MAI-411 and the manufacture of parts of this aircraft from composite materials, the release of which is also planned to be carried out at the Kizlyar plant in the future. It is expected that the cost of the MAI-411 will not be higher than a single-engine aircraft of this class. According to preliminary calculations, on the market the aircraft will cost about 20-25 million rubles.

Answering the AviaPort's question about the certification of the MAI-411, Vadim Yuryevich noted that in April 2018 the prototype had successfully passed the first flight tests in Kizlyar, the results of which received the certificate of a flying vehicle single prototype. Currently, flight tests continue, and on July 2019, several dozen flights have already been performed.