Graduates of MAI Talked about Preparing for Space Flight 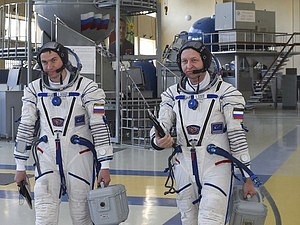 Currently, 37-year-old main crew commander Nikolay Tikhonov and 50-year-old flight engineer Andrey Babkin are undergoing pre-flight training in Star City. The first start for both cosmonauts is scheduled for March 20, 2020, the day of the 90th anniversary of the Moscow Aviation Institute. They told the Sever Stolitsy newspaper about how their dream comes true.

Childhood Dream Has Become a Profession

The path to cosmonautics for Nikolay Tikhonov began at school.

“I attended the radio and aerospace modeling club, became the winner of the All-Russian competition Cosmos and was enrolled in MAI without entrance examinations,” - he says. In his student years, he was a volunteer of the All-Russian youth aerospace society Soyuz. “The first time I tried to pass the qualifying medical examination to the cosmonaut corps at my 4th year at MAI. After graduation from the university in 2005, I worked at the S.P. Korolev Rocket and Space Corporation Energia (RSC Energia), and in 2006 during the next recruitment I was enlisted in the cosmonaut corps," - added Nikolay Tikhonov.

Nikolay Tikhonov has already completed pre-flight training as part of the International Space Station (ISS) - 49/50 backup crew and the ISS-57/58 main crew. But due to the reduction in the number of Russian crew members on the ISS, the crew was changed.

The Continuation of the Earthly Profession

Andrey Babkin is in the detachment of test-cosmonauts since 2010. First, he studied at the Mobile Vehicle Engineering Institute, served in the army, and only then was transferred to the Faculty №6 Aerospace of MAI, where he received an engineering degree. He worked for a long time at the RSC Energia, defended his thesis.

“The work as an astronaut is a continuation of my earthly profession. I like to solve technical problems and engage in scientific research,” - says Andrey Babkin.

The Day Is Arranged by the Hour

According to the astronauts, the preflight preparation does not require any serious restrictions.

“You can drink coffee in the morning, have everything you like, but it is very important to keep a good physical shape, so much attention is paid to physical education,” - says Nikolai Tikhonov.

“The working day at the preparation stage is scheduled by the hour. At nine in the morning, classes begin, which include training on spacecraft simulators, studying equipment, where we conduct scientific experiments, get acquainted with on-board documentation and theoretical lectures, and training takes place in different countries on different ISS segments,” - Andrey Babkin added.

Take a Video about the Flight

Each flight is unique in its tasks and technical equipment.

“The scientific program is agreed approximately six months before the flight. But we already know the list of the main scientific experiments to be performed, as well as the upcoming tasks of maintenance and repair of the station. In addition, we plan to shoot as part of educational programs for additional aerospace training. We hope this helps to distract children from the TV screens and gadgets and show them that there are other equally exciting activities. If at least 10 of 100 children go to my alma mater - Moscow Aviation Institute - after the school, and then they will work for the benefit of Russian cosmonautics, this is already a great achievement,” - says Nikolay Tikhonov.