MAI Became the Champion of Moscow in Student Rugby 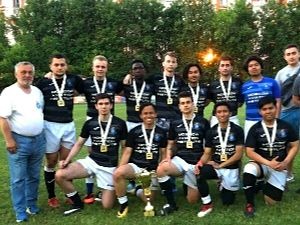 On May 29, the championship final among Moscow universities in classic rugby was held at the Fili Stadium. MAI team played without 5 leading players who for various reasons could not take part in the games. The Moscow State University team didn’t appear on the game with our team, and they were credited with a technical loss of 0:30.

In 1/2 of the final, MAI team was opposed by the team of the Financial University under the Government of the Russian Federation. The game ended with a score of 31:0 in our favor. In the final two teams met, which for many years challenged the title of the best student team in Moscow. This is the team Moscow Engineering Physics Institute (MEPhI), which all these years lost MAI. And this time MAI team won a difficult victory with a score of 10:7.

Now the main task of the players of the MAI team is to successfully pass midterms, combining exams with preparation and participation in the last student tournament - Cup for the Prizes of Moscow Sports Department, which will be held on June 16, at the Slava Stadium. At the same time, the 60th Anniversary Cup of the MAI Rugby Club will be played.