MAI Became the Champion of Russia in Rugby-7 Among Students 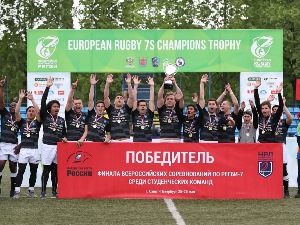 On May 25 and 26 in St. Petersburg, the 12 strongest student rugby teams of Russia gathered to determine the best team of the country in an uncompromising battle. The final tournament was attended by winners of the championships of federal districts, Moscow and St. Petersburg. The games were held at the SKA Stadium. The match for the 3rd place and the championship final were held at the Petrovsky Stadium, where the European Cup was held these days.

In the group stage and on the way to the final, the MAI players confidently outplayed all their rivals. The final game with the Siberian Federal University was held in the presence of several thousand fans from all over Europe. Having shown the maximum will to win and dedication, our team did not give anyone any doubt that the MAI team continues to be the strongest student team in Russia. The outcome of the meeting was 21: 5.

The students were in a good mood for the whole tournament, despite the fact that we had and have many other competitions. The players spent a lot of effort, and despite all the difficulties - I just love them! I am glad that guys like them play rugby. It is worth saying that I am very pleased that young people from foreign countries came to our university. In particular, the player who made the first pulling (MAI student from Malaysia). Wherever we play, all the spectators start cheering on him, since he is a very good rugby player. Well, the task is completed - we are the champions!

Also, our students were awarded in special nominations: Ikhvan Muhammad was recognized as the best midfielder, and Igor Fedorov became the best full-back player of the championship.

Congratulations to the MAI team and the coaching staff with a victory!