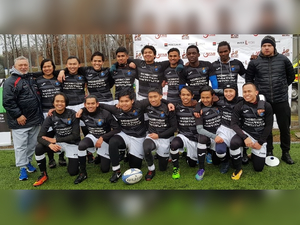 On April 14, 2019, a Financial University Cup of Rugby-7 was held at the Druzhba park stadium. The MAI- 2 rugby team, composed of international students, took the honorable third place at the tournament.

Our university was represented by a team of international MAI students. As a result of a bitter struggle, our rugby players, having beaten the first team of Financial University with a score 17: 10 and the team of MEPhI with a score 24: 12, and losing to MIPT with a score 7:10, took second place and gave themselves an opportunity to fight for the third place of the tournament.

In this game, MAI team did not leave any chances to the players from the second team of Financial University. MAI team beat them with a score 27: 7. The first place was taken by the team of D. Mendeleev University of Chemical Technology of Russia, the second rugby team of MIPT. Player of MAI team Muhammad Ikhvan Bin Khayril Anuar was recognized as the best rugby player of the tournament.