MAI Took Part at the Education Fair in India 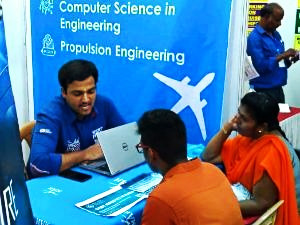 From March 30 to April 5, 2019, MAI participated in the Education Fair organized by ISE Education Media.

The Education Fair took place in three cities of southwestern state of India Kerala: Cochin, Kottayam, Calicut. The main goal of the event was to promote Moscow Aviation Institute among potential Indian students.

The most popular location among prospective students and their parents became the city of Kottayam. Around 1000 people would have visited the exhibition during the 2 days of fair.

The age of prospective students was between 16-20 years. The most popular educational programs of MAI among the fair audience were Aircraft Engineering, Spacecraft Engineering and Control Systems and Computer Science Engineering.

“Such events are very useful for our university. Most of MAI Indian Students come from Southern India, and touring a few cities in parts of South India gave us a chance to directly present the university to potential students. MAI and Russia prove to be World Class University and this is the reason why many Indians are turning their attention towards MAI and that is the same reason our International Department is focusing on the Asian Giants such as China and India,” – said Praveen Sankaran.

The number of Indians inside MAI increased from 12 to 50+ in just 2 years. Opening up the University through English medium programs has caught a good attention among Indians for MAI.