Gagarin's Flight into Space - the Triumph of the Human Mind 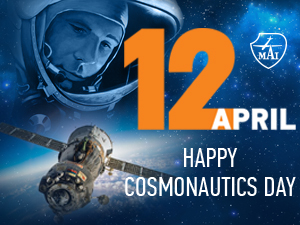 April 12, in Russia is celebrated as Cosmonautics Day. On this day, 58 years ago, the Soviet cosmonaut Yuri Gagarin on the Vostok-1 spacecraft orbited over the planet Earth and became the first man in space.

Congratulations on the holiday, symbolizing the triumph of scientific thought and human courage, from the Rector of Moscow Aviation Institute, Chairman of the Civic Chamber of the Russian Federation for the development of education and science Mikhail Aslanovich Pogosian.

"Dear friends! I congratulate you on Cosmonautics Day - one of the greatest dates in the history of mankind. On April 12, 1961, the era of great geographical discoveries was replaced by the era of space exploration.

In the XXI century, reports of space flights and satellite launches became a familiar part of the news landscape, flights to distant planets and exploration of the moon are discussed at scientific conferences and government meetings, and not on the pages of science fiction novels. Today it is very important to unite the efforts of scientists, engineers, the state and civil society so that space research and discoveries work for the benefit of the future development of mankind".